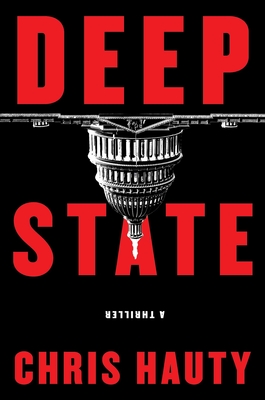 This is book number 1 in the A Hayley Chill Thriller series.

“Deep State is a compelling page-turner with an unpredictable last-minute twist that will knock you off your feet. Hayley Chill is an Army infantry soldier with an eye on doing more to serve her country. In true snatched-from-the-headlines fashion, Hayley accepts a White House internship in the administration of a highly controversial and divisive president with apparent strong Russian leanings, which puts him in the crosshairs of operatives intent on taking him and his administration down. Hayley finds herself caught up in the intricate plot and may be the only one who can stop it. Perhaps ironically, I really think this book would appeal equally to suspense-loving readers on either side of the political spectrum!”
— Brent Bunnell, Fiction Addiction, Greenville, SC

“No shrinking violet, Hayley Chill is ex-Army and an ex-boxer who takes a job as a White House intern and subsequently has several life-changing interactions with the president. Deep State is a fast-paced thriller with unexpected twists and turns and an ending that will take you totally by surprise.”
— Scott Simons, The Dog Eared Book, Palmyra, NY

“One of the more surprising double-reverse plot twists…in some time.” —The New York Times

“The plot...rings eerily true...will keep you turning the pages well into the night.” —Jack Carr, former Navy SEAL and acclaimed author of The Terminal List and True Believer

In this white-knuckled, timely, and whip-smart debut thriller, a deadly plot against the president’s life emerges from the shadows of the Deep State.

Recently elected President Richard Monroe—populist, controversial, and divisive—is at the center of an increasingly polarized Washington, DC. Never has the partisan drama been so tense or the paranoia so rampant. In the midst of contentious political turf wars, the White House chief of staff is found dead in his house. A tenacious intern discovers a single, ominous clue that suggests he died from something other than natural causes, and that a wide-ranging conspiracy is running beneath the surface of everyday events: powerful government figures are scheming to undermine the rule of law—and democracy itself. Allies are exposed as enemies, once-dependable authorities fall under suspicion, and no one seems to be who they say they are. The unthinkable is happening. The Deep State is real. Who will die to keep its secrets and who will kill to uncover the truth?

Chris Hauty is a screenwriter who has worked at all the major movie studios, in nearly every genre of film. He currently lives in Venice, California. Deep State, his debut novel, was an instant national bestseller in the USA. His second novel, Savage Road, published in 2021 and his third, Storm Rising, will publish in 2022. All of the Hayley Chill thrillers can be read as part of the series or as standalones.

"The bodies pile up, as do the wry asides about what is and what is not good for the country. Hayley Chill is one of those preternaturally talented solo operatives skilled in every endeavor, from her physical stamina to her administrative competence to her Jason Bourne-like cool in the face of near-death experiences. She also figures in one of the more surprising double-reverse plot twists I have seen in some time."
— The New York Times Book Review

"The plot of Chris Hauty’s DEEP STATE rings eerily true in a novel that will keep you turning the pages well into the night. Be warned, you might not look at newspaper headlines the same way come morning. In a country with a government of the people, by the people and for the people, is the DEEP STATE really pulling the strings?"
— Jack Carr, former Navy SEAL and critically acclaimed author of THE TERMINAL LIST and TRUE BELIEVER

"Hauty provides a fresh twist on the American patriot. Hayley Chill has what it takes to carve out her place in today’s thriller scene. She’s shrewd, fierce, and always lands the blow that puts her on top."
— Kyle Mills, #1 New York Times bestselling author of RED WAR and LETHAL AGENT

"DEEP STATE is a modern-day whodunnit set in the political morass that is current Washington, DC. Riveting and engrossing with an atypical protagonist, it keeps you guessing until the final pages are turned. Chris Hauty has just placed a marker in the world of political thrillers."
— Matthew Betley, acclaimed author of RULES OF WAR

"An edge-of-your-seat thriller novel you'll want to read in 2020."
— Bookriot

"Screenwriter Chris Hauty’s talents are on full display in his terrific debut, Deep State, a crackling and perfectly timed political thriller... all the ingredients of a Brad Meltzer or David Baldacci-like sizzler of a story."
— Providence Journal

"DEEP STATE is a compelling page-turner with an unpredictable last-minute twist that will knock you off your feet."
— Library Journal

"With his super-charged plot and a perfectly-timed, mind-bending twist, Chris Hauty becomes the latest writer to take the thriller world by storm . . . DEEP STATE will compete for best debut novel of 2020 and have readers dying for the anticipated follow-up."
— The Real Book Spy

"This one will require reading in one sitting."
— Lima Charlie Reviews

"DEEP STATE is a perfect political thriller for our times."
— CrimeReads, Most Anticipated Crime Books of 2020