What She Said & What I Heard: How One Man Shut Up and Started Listening (Paperback) 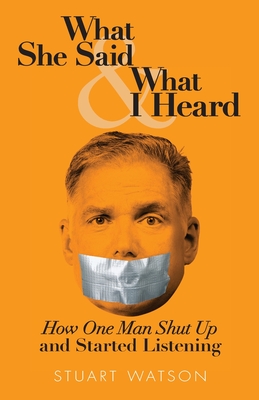 Meet a man who actually listens to women. An award-winning investigative journalist tells poignant stories in this compulsively readable memoir, each revealing a profound moment when a woman said something that he actually heard, transforming his life for the better. With more than 50 photos, plus dozens of links to bonus audio and video, each chapter is an immersive experience that grabs hold and does not let go.

Stuart Watson spent his first career earning a living by talking. His whole identity was wrapped up in being a Peabody-award-winning investigative reporter. Then he turned 55 and got fired. He began to doubt himself. He flirted with suicide. To escape such dark thoughts, he began a five-year odyssey conducting dozens and dozens of interviews for a podcast, a book, and a film. Increasingly, those interview subjects were women. But all too often, Stuart interrupted or "mansplained" or flat-out argued. It didn't work. So gradually he learned how to stop talking over women and really listen to them. The result is this book and a podcast called ManListening, in which Stuart elevates the stories of a diverse group of strong women who bounced back.

What She Said & What I Heard is a memoir told through a series of profound moments where a woman said something that Stuart actually heard. He shifted and changed because in a moment, he really listened. This book is for broken people and the people who don't know how to hear them. If you're still reading, you're one of us.