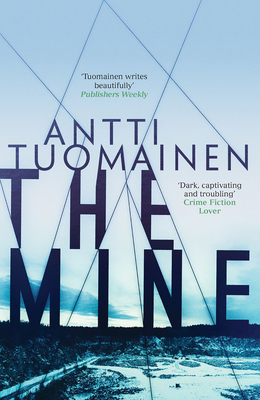 By Antti Tuomainen, David Hackston (Translated by)
$14.95
Email or call for price.

An investigative reporter sets out to uncover the truth about a mining company in Northern Finland, whose activities have caused an environmental disaster. Timely, atmospheric and chilling Nordic Noir from one of Finland’s finest writers…

‘A simple story told with passion and elegant sadness’ The Times

A hitman. A journalist. A shattered family. A mine spewing toxic secrets that threaten to poison them all…

In the dead of winter, investigative reporter Janne Vuori sets out to uncover the truth about a mining company, whose illegal activities have created an environmental disaster in a small town in Northern Finland.

When the company’s executives begin to die in a string of mysterious accidents, and Janne’s personal life starts to unravel, past meets present in a catastrophic series of events that could cost him his life.

A traumatic story of family, a study in corruption, and a shocking reminder that secrets from the past can return to haunt us, with deadly results, The Mine is a gripping, beautifully written, terrifying and explosive thriller by the King of Helsinki Noir.

’Antti Tuomainen is a wonderful writer, whose characters, plots and atmosphere are masterfully drawn’ Yrsa Sigurðardóttir

‘One of the most compelling, emotionally satisfying and beautifully realised crime thrillers that I have encountered this year. The clarity and deceptively simple style of Tuomainen’s prose is utterly compelling’ Raven Crime Reads

Finnish Antti Tuomainen was an award-winning copywriter when he made his literary debut in 2007 as a suspense author. The critically acclaimed My Brother’s Keeper was published two years later. In 2011, Tuomainen’s third novel, The Healer, was awarded the Clue Award for ‘Best Finnish Crime Novel of 2011’ and was shortlisted for the Glass Key Award. Two years later, in 2013, the Finnish press crowned Tuomainen the ‘King of Helsinki Noir’ when Dark as My Heart was published. With a piercing and evocative style, Tuomainen was one of the first to challenge the Scandinavian crime genre formula, and his poignant, dark and hilarious The Man Who Died became an international bestseller, shortlisting for the Petrona and Last Laugh Awards. The recently published Palm Beach, Finland has been a massive critical success, with Marcel Berlins of The Times calling him ‘the funniest writer in Europe’, and making it one of his books of the year.

"U.S. audiences should prepare to be every bit as enthralled as the Finns. . . . Readers attracted either to dystopian fiction or to Scandinavian crime will find gold here." —Booklist starred review on The Healer