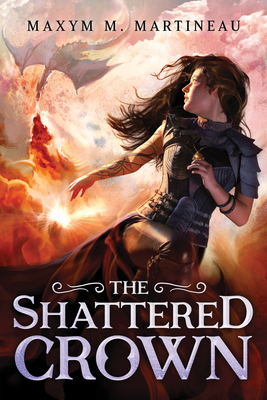 When Leena Edenfrell swore herself to the Frozen Prince, Noc Feyreigner, she never dreamed she'd ignite the flames of war. And yet as their enemies combine forces against them, Leena and Noc have no choice but to gather their allies and fight. While Noc makes moves to reclaim their lost throne, Leena acts as the new Crown of the Charmer's Council, searching for a way to stop the enemy from raising an ancient creature destined to burn their world to ash.

But no matter how hard they fight—for each other, for their friends, and for everyone who looks to them to lead—Leena can't escape the feeling that her time is running out.

Soon a winged shadow reigns over Lendria, and Leena is the last thing standing between everyone she loves and total destruction. It's in that moment that Noc and Leena discover the true price of victory: in order to tame the ancient dragon, Leena will have to sacrifice her own heart...and lose herself in the process.

Intense, compelling, and impossible to put down, The Shattered Crown is perfect for readers looking for:

Maxym M. Martineau is an article and social media writer by day and a fantasy romance author by night. When she's not getting heated over broken hearts, she enjoys playing video games, sipping a well-made margarita, competing in just about any sport, and of course, reading. She earned her bachelor's degree in English Literature from Arizona State University and lives with her husband and fur babies in Arizona. Connect with her at MaxymMartineau.com or through Twitter and Instagram @maxymmckay.