Because It Is So Beautiful: Unraveling the Mystique of the American West (Paperback) 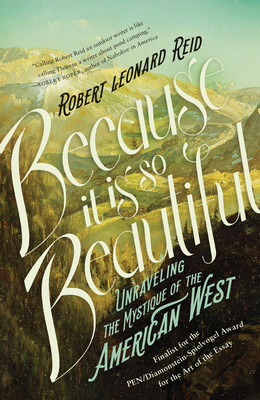 A Finalist for the PEN/Diamonstein-Spielvogel Award for the Art of the Essay
Yes, every inch of the globe has been seen, mapped, photographed, and measured, but is it known? Robert Leonard Reid doesn't think so. To draw a circle and calculate its diameter is not to know the circle. In this collection, Reid distinguishes himself from many science-based nature writers, using the natural world as a springboard for speculations and musings on the numinous and the sacred, injustice, homelessness, the treatment of Native Peoples in the United States, and what pushes mountaineers to climb. Ranging in their settings from eastern New Mexico to northern Alaska, Reid's essays illustrate his belief that the American West is worth celebrating and caring for.
Taking its title from an affecting speech given by renowned author Barry Lopez, Because It Is So Beautiful is a response to desperate questions surrounding America's wildlands. Lopez's words resonated with the young mountaineer-musician-mathematician Robert Leonard Reid, who was struggling to understand his relationship to the world, to find his vision as a writer. What he learned on that long-ago evening is knit throughout the nineteen pieces in the collection, which include essays from Reid's previous books Arctic Circle, Mountains of the Great Blue Dream, and America, New Mexico; three essays that appear here in print for the first time; as well as revised and expanded versions of essays that appeared in Touchstone, The Progressive, and elsewhere.

Author of Mountains of the Great Blue Dream, Arctic Circle: Birth and Rebirth in the Land of the Caribou, and America, New Mexico, Robert Leonard Reid has received grants from the Sierra Arts Foundation and the Nevada Arts Council. He has worked as a songwriter, a cabaret pianist, and a mathematics textbook writer. He lives in Carson City, Nevada, with his wife, Carol Dimmick Reid. They have a son, Jake.

Praise for Because It Is So Beautiful: Unraveling the Mystique of the American West

“If Robert Leonard Reid isn’t on your reading list of Western writers of nonfiction, you should place him on it . . . Reid writes about nature in ways that are clear-eyed, incandescent, and provocative.” —Albuquerque Journal

"There are many books about the American West. This one, Robert Leonard Reid's lustrous, selected essays from the last four decades, is indispensable. The pages embody the beauty they describe. We find here lightning bolts and bears, the balletic caribou, atomic weapons, legendary wolves, mountaintops where light is a territory of spirit, adventures daft and courageous. We find both the grit and sorrow of history and meditations on redemption and the sacred. But best of all, and most of all, we have the company of the writer: his clear, loving, respectful prose, his bemusement and honesty and learning, the finery of his reflections, and the integrity of his journey.” —Steven Nightingale, author of Granada and The Hot Climate of Promises and Grace

"Calling Robert Reid an outdoor writer is like calling Thoreau a writer about pond camping. There is so much more. He writes authoritatively and passionately about the West, especially the wild parts. Wilderness is not better when empty of man, in Reid’s descriptions of it; in fact, you might almost say it fails to exist, without some questing consciousness standing under a nighttime mountain sky, hanging thoughts on the shivering stars. Reid has been writing classic American essays full of Twain-like humor and Emersonian moral force for forty years now. In this collection we find him in his calmly formidable prime." —Robert Roper, author of Nabokov in America

"I promise you, this is a man who can enhance, change, and vitalize your life. I also promise you he brings all that together in these pages: you’re going to love this book." —David Lee, Pulitzer Prize nominee for News from Down to the Cafe

"Forty years in the making, this astonishing collection could not come at a more urgent time. Its title, Because It Is So Beautiful, alludes to Robert Reid’s unrelenting quest to celebrate our vulnerable, historic wilderness, but it also speaks to his prose, and to himself. With lyricism, charm, and trenchant observations, he inspires readers to meditate on the importance of being alive, of being responsible for the landscapes we inhabit. He remains not merely a first-class writer but an invaluable moral guide."—Sascha Feinstein, author of Wreckage: My Father’s Legacy of Art & Junk and Ask Me Now: Conversations on Jazz & Literature


Praise for Arctic Circle: Birth and Rebirth in the Land of the Caribou

“Mountaineer and writer Robert Leonard Reid had a dream, but for 25 years life kept getting in the way. He wanted to see the caribou on their 2,700 mile annual migration across the Arctic. Wrapped in mystery, it is the longest migration of any land animal on Earth. Reid finally made the trip on the eve of his 60th birthday. Arctic Circle: Birth and Rebirth in the Land of the Caribou is his melancholy, witty, scientific, and spiritual account of the trip. Though Reid was late in following his dream, the timing of his book celebrating the majestic beauty of a place oil companies are eyeing for drilling is impeccable.” —The Boston Globe

“As Reid recounts his Arctic sojourns with awe, lyricism, and bemusement, he subtly interlaces inner and outer worlds and traces the circles of struggle and understanding, life and death. Spectacular descriptions, charming wit, and forthright reflections on what makes a place sacred become striking testimony to the importance of the Arctic wild and the need to preserve it.” —Booklist

“What Reid finds in the Arctic is a world that transcends easy definition. He guides us through his experiences in a book which is part memoir, part spiritual quest, and part adventure story, with a healthy dose of natural history. This book is perfect for anyone who enjoys a good travelogue or memoir, and the engaging blend of spiritual and scientific elements ensure a broad appeal.” —ForeWord Reviews

“From deserts to mountains, the freedom of prairie expanses to dodging traffic on Central Boulevard in Albuquerque, Reid leaves the reader appreciating his accuracy and forthrightness. . . . Don't let this one get away. It delivers enthralling reading.” —Taos News

“Reading what someone has written about your home state is an experience similar to listening to an analyst describe your mental symptoms: You cringe and you snort and, occasionally, you stand amazed because the writer has hit the mark exactly right.” —Albuquerque Journal

“The title suggests a book of two layers. Reid, who exhibits strong feelings for his adopted state, travels throughout New Mexico to see what makes it special for him. While visiting peoples and places, he uses New Mexico as a microcosm to elaborate on larger societal problems. His trip to Santa Fe, now a chic city with its own style, magnifies the widening gap between haves and have-nots and the problem of homelessness. He visits artists in Taos, springing into a discussion on art. His travels to other parts of the state allow for explorations of gun control, Native Americans, the plight of immigrants, and storage of spent nuclear fuel.” —David Schau, Library Journal

“Not your average New Mexico travel book. Reid uses the eight years he spent working and traveling the literal and figurative back roads of New Mexico as a prism to examine what he sees as wrong and right with America. Ranging through New Mexican space and time, Reid comments on both contemporary and historical events, including the U.S. Army's action during the Civil War, forcing thousands of Native Americans (mainly Navajos) to march from their native lands to a bleak settlement at Fort Sumner for ‘civilizing.’ The text is full of people and places, both expected (Georgia O'Keeffe, Mabel Dodge, D. H. Lawrence, around Taos; J. Robert Oppenheimer at Almagordo and Los Alamos) and unexpected (Saint Francis, as much at home in nineteenth-century Santa Fe as thirteenth-century Assisi). Reid includes some great descriptions of natural scenery and quotes everyone from G. K. Chesterton to Pablo Picasso.” —Joel Neuberg, Booklist


Praise for Mountains of the Great Blue Dream

“Robert Leonard Reid, a well-known writer on alpinism, delights in the satori-inducing dangers of mountaineering. ‘Once on vertical rock in desert country,’ he writes in Mountains of the Great Blue Dream, ‘I reached for a crack, inserted my fingers, stepped up, and stared into the steely eyes of a rattlesnake coiled two feet from my hand.’ And that's just a start, for this fine collection of essays recounts many other death-defying adventures endured in nights spent pinned to rock walls in howling winds, days battling ice storms and uncooperative ropes. But this is not just a book of macho accomplishment on the high peaks: Reid writes affectionately of the mountain landscapes among which he has walked and climbed, lending his book a rare and welcome poetry.” —Gregory McNamee, author of The Ancient Southwest

“Wonderfully fluent, even visionary. . . . Part meditation, part adventure tale, part thoughtful investigation…From a moving essay on the last wolf trapped in Colorado, to an explanation of sound, to a dizzying and horrifying short-order history of our quickly ravaged continent and a thoughtful religious debate, Robert Leonard Reid has assembled a book that is wide-ranging yet concise and joyously coherent.” —Louise Erdrich, Chicago Tribune