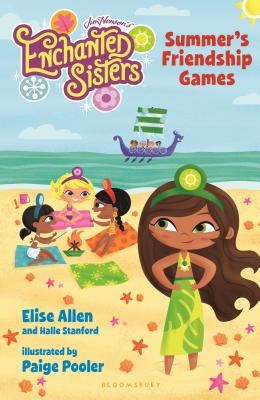 Summer has always secretly enjoyed hanging out with Thunderbolt, one of the mischievous Weeds who bring disaster and mayhem everywhere they go. Sure, the Weeds have acted poorly in the past, but they can't be all bad . . . right? Summer's sisters couldn't disagree with her more-especially after the boys ruin Summer's bonfire party. When the two teams of magical siblings are encouraged by Mother Nature and Bluster Tempest to settle their disagreements in a series of competitive sports, Summer and Thunderbolt are forced to stop talking. But is winning and siding with their siblings really worth ruining their friendship?

The fourth installment of this charming series is perfectly suited for newly independent readers who love the Rainbow Fairies and Candy Fairies series. Don't miss Spring's adventure, also in Winter 2015!

Elise Allen is author of Enid Blyton's Enchanted World series and the young adult novel Populazzi. She is also co-writer of Devoted and The New York Times Bestselling Elixir, by Hilary Duff. She lives in Los Angeles. www.eliseallen.com

Halle Stanford, an eight time Emmy-nominated children's television producer, is in charge of creating children's entertainment at The Jim Henson Company. She currently serves as the Executive Producer on the award winning series Sid the Science Kid, Dinosaur Train, Pajanimals, and Doozers. She lives in Los Angeles.

Paige Pooler is an artist whose illustrative work can be found in American Girl magazine, as well as the Liberty Porter, Trading Faces, and My Sister is a Vampire middle grade series. www.paigepooler.com

The Jim Henson Company is an established leader in family entertainment for over fifty years and is the creator of such Emmy-nominated hits as Sid the Science Kid, Dinosaur Train, Pajanimals, and Fraggle Rock. They are currently developing this series as an animated TV property.