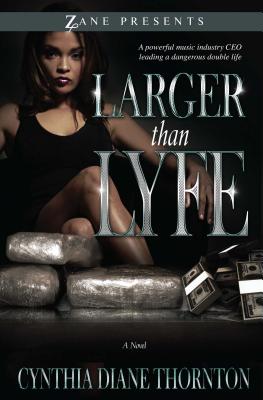 Beautiful, Wharton-educated, recording industry mogul Keshari Mitchell is leading a double life. As owner of Larger Than Lyfe Entertainment, a multimillion-dollar record label specializing in platinum-selling hip-hop, R&B, and jazz, she is undeniably the most powerful woman in the American music industry. As second-in-command in The Consortium, one of the most powerful, Black organized crime rings on the West Coast, she also happens to be one of the most powerful and most feared women in the United States’ criminal underworld.

But she wants out—out of an organization that does not accept resignations. As Larger Than Lyfe unfolds, readers receive a VIP pass into Keshari Mitchell’s very glamorous but extremely dangerous life. Readers get a taste of the decadence, drama, and hedonism so prevalent in the music industry, while also viewing the dark side of organized crime where millions of dollars are made and controlled from the trafficking and sale of cocaine, where law enforcement can be bought and corrupted, and where lives can be snuffed out strategically and without remorse at any given time to protect and expand criminal empires.

Keshari Mitchell is on the verge of total meltdown as she works desperately on a daily basis to keep the stressful duality of her life as record industry mogul and increasingly reluctant crime boss separate. This most complex predicament is complicated all the more when she breaks her own rule regarding romantic entanglements and falls in love with the handsome, new, West Coast general counsel at ASCAP (American Society of Composers, Authors and Publishers).

Cynthia Diane Thornton is the author of Larger than Lyfe and Rise of the Phoenix. She resides in Los Angeles.