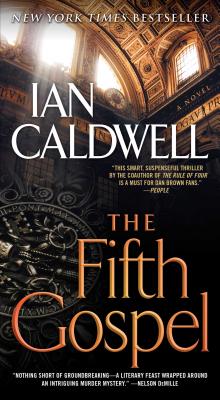 By Ian Caldwell
Email or call for price.
Hard to Find - Not Available for Web Order

“One of the great mysteries of the Catholic Church, The Shroud of Turin, has inspired one of the great writers of our time to create this masterful thriller. Two brothers -- Alex, a Greek Catholic priest, and Simon, a Roman Catholic priest -- are drawn into the intrigue surrounding the Shroud and the origins of the Church following the murder of their friend Ugo, an eccentric curator obsessed with the Shroud who was preparing a major exhibit in the Vatican Gallery. Alex and Simon are dedicated brothers and priests, yet as different in temperament and faith as they are similar in conviction and loyalty. Caldwell unveils much about the world behind the Vatican walls, even as the intricate plot builds to a climax. A spectacular achievement!”
— Luisa Smith, Book Passage, Corte Madera, CA

The instant New York Times bestseller from the author of the international sensation The Rule of Four combines a lost gospel, a contentious relic, and a dying pope’s final wish into a “deliciously labyrinthine” (Providence Journal) intellectual thriller that “kicks off at ninety mph and doesn’t slow down” (Associated Press).

A mysterious exhibit is under construction at the Vatican Museums. The curator is murdered at a clandestine meeting on the outskirts of Rome a week before it opens. That same night, a violent break-in rocks the home of Greek Catholic priest Father Alex Andreou. When the papal police fail to identify a suspect in either crime, Father Alex decides that to find the killer he must reconstruct the secret of what a little-known, true-to-life fifth gospel known as the Diatessaron reveals about the church’s most controversial holy relic. But just as he begins to understand the truth about his friend’s death and its consequences for the future of the Christian church, Father Alex discovers a ruthless stalker is hunting him—an enemy with a vested stake in the exhibit that he must outwit to survive.

Rich, authentic, erudite, and emotionally searing, The Fifth Gospel is a riveting novel of suspense and a feast of biblical history that satisfies on every level.

Ian Caldwell is the author of the New York Times bestsellers The Fifth Gospel and (with Dustin Thomason) The Rule of Four, which sold nearly two million copies in North America and was translated into thirty-five languages. He lives in Virginia with his wife and children.