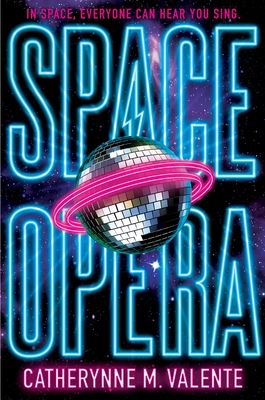 If you like Hitchhiker's Guide to the Galaxy, Eurovision, or Glam-Rock in general, you'll go wild for Space Opera! When the human race is entered into the Metagalactic Grand Prix, its up to Decible Jones, washed-up genderqueer rockstar, to sing for the sentience of all humankind! Heartwarming, hilarious, and genuinely moving, Space Opera is a fantastic summer read!

The Hitchhiker's Guide to the Galaxy meets the joy and glamour of Eurovision in bestselling author Catherynne M. Valente's science fiction spectacle, where sentient races compete for glory in a galactic musical contest…and the stakes are as high as the fate of planet Earth.

A century ago, the Sentience Wars tore the galaxy apart and nearly ended the entire concept of intelligent space-faring life. In the aftermath, a curious tradition was invented—something to cheer up everyone who was left and bring the shattered worlds together in the spirit of peace, unity, and understanding.

Once every cycle, the great galactic civilizations gather for the Metagalactic Grand Prix—part gladiatorial contest, part beauty pageant, part concert extravaganza, and part continuation of the wars of the past. Species far and wide compete in feats of song, dance and/or whatever facsimile of these can be performed by various creatures who may or may not possess, in the traditional sense, feet, mouths, larynxes, or faces. And if a new species should wish to be counted among the high and the mighty, if a new planet has produced some savage group of animals, machines, or algae that claim to be, against all odds, sentient? Well, then they will have to compete. And if they fail? Sudden extermination for their entire species.

This year, though, humankind has discovered the enormous universe. And while they expected to discover a grand drama of diplomacy, gunships, wormholes, and stoic councils of aliens, they have instead found glitter, lipstick, and electric guitars. Mankind will not get to fight for its destiny—they must sing.

Decibel Jones and the Absolute Zeroes have been chosen to represent their planet on the greatest stage in the galaxy. And the fate of Earth lies in their ability to rock.

Catherynne M. Valente is an acclaimed, New York Times bestselling creator of over forty works of fantasy and science fiction, including the Fairyland novels and The Glass Town Game. She has been nominated for the Nebula and World Fantasy awards, and has won the Otherwise (formerly Tiptree), Hugo, and Andre Norton award. She lives on a small island off the coast of Maine with her partner, young son, and a shockingly large cat with most excellent tufts.

"As if Ziggy Stardust went on a blind date with The Hitchiker's Guide to the Galaxy, then they got smashed and sang karaoke all night long. Cat Valente is mad and brilliant and no one else would have even thought of this, much less pulled it off."
— New York Times bestselling and Hugo-Award winning author John Scalzi

“SPACE OPERA is a book I really needed in this dour, dire age: Valente’s book contains a story and prose that is both electric and breathless, It has the heart of Douglas Adams and the soul of David Bowie. I loved it and it made me happy.”
— New York Times bestselling author Chuck Wendig

“Space Opera sings its heart out in full technicolor. This book made me giggle, freak out, and reflect on life’s tawdry beautiful pageant.”
— Charlie Jane Anders, Nebula Award-winning author of ALL THE BIRDS IN THE SKY

"This glorious glitterball dream of a book is Valente at her best: beguiling, bewitching, and inexplicably demanding.  Are you ready to rock?"
— Seanan McGuire, New York Times bestselling author of the October Daye series

* "Valente has pulled off another spectacular feat of world building (it’s worth reading just for the descriptions of previous performances) and a story which is uproariously funny, sweet, and hopeful."
— Booklist, starred review

"It's all big ideas written in glitter. It's surprising tenderness on a galactic scale. It's about loneliness and nerdliness and acceptance and making fun of the old, frowsy powers that be. Valente offers up a universe in which the only thing of true value is rhythm. Not guns, not bombs, not money, not power, but sex and love and pop songs.
— NPR Books

"Channeling the giants of sci-fi satire and glam rock into a brilliantly over-the-top burlesque, it’s a novel only Catherynne Valente could write."
— B&N SciFi & Fantasy Blog

“The funniest science fiction novel I’ve read since Hitchhiker’s Guide to the Galaxy”.
— The Verge