Use of Force: A Thriller (The Scot Harvath Series #16) (Hardcover) 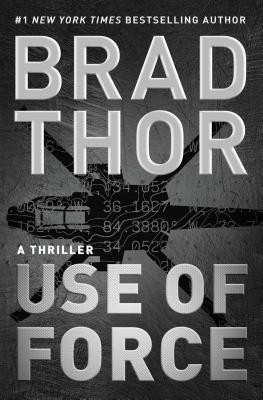 This is book number 16 in the The Scot Harvath Series series.

From #1 New York Times and #1 Wall Street Journal bestselling author Brad Thor comes “his latest pulse-pounding adventure” (The Real Book Spy) that follows covert operative Scot Harvath as he is called upon to stop an ISIS-led plot to destroy the Vatican.

As a storm rages across the Mediterranean Sea, a terrifying distress call is made to the Italian Coast Guard. Days later, a body washes ashore. Identified as a high value terrorism suspect (who had disappeared three years prior), his name sends panic through the Central Intelligence Agency. Where was he headed? What was he planning? And could he be connected to the “spectacular attack” they have been fearing all summer? In a race against time, the CIA taps an unorthodox source to get answers: Navy SEAL turned covert counterterrorism operative, Scot Harvath. Hired on a black contract, Harvath will provide the deniability the United States needs, while he breaks every rule along the way.

Teeming with fascinating characters and electrifying intrigue, Brad Thor does it again and proves why he is known around-the-world as the master of thrillers.

Brad Thor is the #1 New York Times bestselling author of twenty thrillers, including Near Dark, Backlash (one of Suspense Magazine’s Best Books of the Year), Spymaster (“One of the all-time best thriller novels”—The Washington Times), The Last Patriot (nominated Best Thriller of the Year by the International Thriller Writers Association), Blowback (one of the “Top 100 Killer Thrillers of All Time” —NPR), and The Lions of Lucerne. Visit his website at BradThor.com and follow him on Facebook at Facebook.com/BradThorOfficial and on Twitter @BradThor.

"His best book yet. Powerful and reads like the news of what is going on today."
— Glenn Beck, #1 New York Times Bestselling Author

"Brad Thor writes like a high-octane mix of Tom Clancy and Robert Ludlum."
— Andrew Mayne, Bestselling Author of NAME OF THE DEVIL

“Pure thriller gold…well conceived, perfectly timed…elegantly paced, harking back to the best of masters like Alistair MacLean and David Morrell.”
— The Providence Journal

"No one writes a better thriller than Brad Thor--and USE OF FORCE...will be viewed by many as his very best."
— The Washington Times

"When you pick up a novel by Brad Thor, you should prepare to become fully immersed in the machinations and inner workings of modern-day counterterrorism operations . . . . I sleep better at night knowing that peole like Thor and Harvath are out there doing what the rest of us are unable to do to keep our world safe."
— Bookreporter.com

"Adrenaline junkies, this one's for you . . . Filled with action, patriotism, and plot twists, this adventure will keep you on the edge of your seat from the first page to the last."
— Today.com