The Other Side of Silence: A Memoir of Exile, Iran, and the Global Women's Movement (Hardcover) 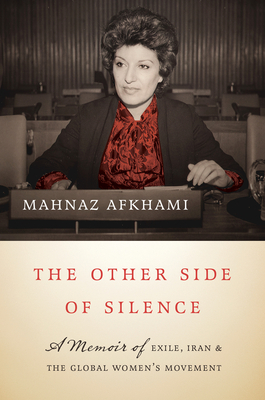 When Mahnaz Afkhami picked up the phone in a New York hotel room early one morning in November 1978, she learned she could never go home again: she had been declared an apostate and enemy of the Iranian Revolution and was now on its death list. Afkhami, Iran's first minister for women's affairs, began to rebuild her life in the United States, becoming an architect of the women's movement in the Global South. Along the way, she encountered familial, cultural, political, and organizational hurdles that threatened to derail her quest to empower women and change the very structure of human relations.

A skilled storyteller who has spent her life in two worlds, Mahnaz Afkhami shares her unexpected and meteoric rise from unassuming English professor to a champion of women's rights in Iran; the clash between Western feminists and those from the Global South; and the challenges of international women's rights work during the so-called war on terror. Her journey through exile shows what it takes to launch and sustain a worldwide grassroots movement: funding, an ever-expanding network, conferences, education, and decades of hard work requiring individuals and organizations to persevere despite ongoing wars, humanitarian disasters, and climate change. Told with humor, honesty, and compassion, Afkhami's remarkable story illuminates the possibility of bringing opportunity and choice to women across the world.