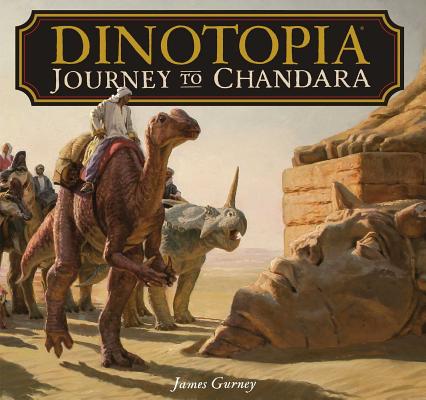 Before there was Jurassic Park, there was a fantastical world where humans and dinosaurs lived together in peace. Revisit this magical land in Dinotopia: Journey to Chandara.

After many years of searching, artist James Gurney discovered in a used bookstore a never-before-seen journal by the nineteenth-century explorer Arthur Denison. Denison's previous travel accounts, published as Dinotopia: A Land Apart from Time and Dinotopia: The World Beneath, introduced a lost island where dinosaurs and humans live together in peaceful interdependence.

Now Professor Denison and his saurian companion, Bix, set out on a perilous journey to the forbidden empire of Chandara. When their personal invitation from the emperor goes missing, they are forced to cross the border penniless and in disguise. Every step of the way, Denison documents in exquisite detail and the creatures, characters, and architecture he encounters: a village composed of three ships propped by on end, a fifty-foot-tall Brachiosaurus outfitted for fire fighting, an Allosaurus tending its hatchlings, young pilots air jousting on giant pterosaurs, and much more.

The land of Dinotopia is conjured by a brief but vivid narrative and a beguiling variety of visuals, including maps, cutaway views, and mechanical diagrams. The lives of the humans are intertwined with those of the dinosaurs and ancient mammals, all of which are actual species portrayed according to the latest scientific research. By turns whimsical, dramatic, and philosophical, the journal radiates a life-affirming vision that will cast a new light on the overlooked wonders of our own world.

James Gurney's unique blending of fact and fantasy has won Hugo, Chesley, Spectrum, and World Fantasy Awards. His work has been featured in one-man exhibitions at the Smithsonian Institution, the Norman Rockwell Museum, the Delaware Art Museum, and the U.S. embassies in Switzerland and Yemen. He lives with his wife, Jeanette, in the Hudson Valley of New York State.