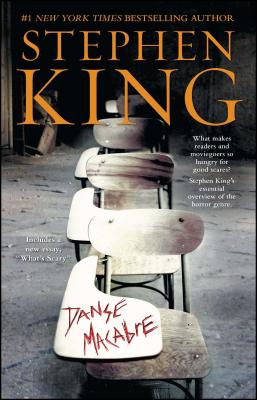 Before he gave us the “one of a kind classic” (The Wall Street Journal) memoir On Writing, Stephen King wrote a nonfiction masterpiece in Danse Macabre, “one of the best books on American popular culture” (Philadelphia Inquirer).

From the author of dozens of #1 New York Times bestsellers and the creator of many unforgettable movies comes a vivid, intelligent, and nostalgic journey through three decades of horror as experienced through the eyes of the most popular writer in the genre. In 1981, years before he sat down to tackle On Writing, Stephen King decided to address the topic of what makes horror horrifying and what makes terror terrifying. Here, in ten brilliantly written chapters, King delivers one colorful observation after another about the great stories, books, and films that comprise the horror genre—from Frankenstein and Dracula to The Exorcist, The Twilight Zone, and Earth vs. The Flying Saucers.

With the insight and good humor his fans appreciated in On Writing, Danse Macabre is an enjoyably entertaining tour through Stephen King’s beloved world of horror.

Stephen King is the author of more than sixty books, all of them worldwide bestsellers. His recent work includes Fairy Tale, Billy Summers, If It Bleeds, The Institute, Elevation, The Outsider, Sleeping Beauties (cowritten with his son Owen King), and the Bill Hodges trilogy: End of Watch, Finders Keepers, and Mr. Mercedes (an Edgar Award winner for Best Novel and a television series streaming on Peacock). His novel 11/22/63 was named a top ten book of 2011 by The New York Times Book Review and won the Los Angeles Times Book Prize for Mystery/Thriller. His epic works The Dark Tower, It, Pet Sematary, Doctor Sleep, and Firestarter are the basis for major motion pictures, with It now the highest-grossing horror film of all time. He is the recipient of the 2020 Audio Publishers Association Lifetime Achievement Award, the 2018 PEN America Literary Service Award, the 2014 National Medal of Arts, and the 2003 National Book Foundation Medal for Distinguished Contribution to American Letters. He lives in Bangor, Maine, with his wife, novelist Tabitha King.