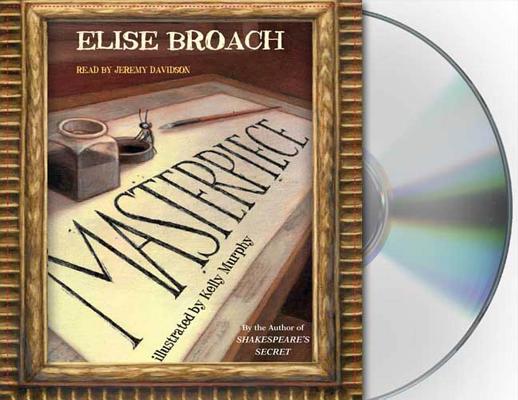 By Elise Broach, Jeremy Davidson (Read by)
$32.99
Email or call for price.

“A marvelous story about a boy who doesn't fit in, a beetle who longs for adventure, and how they find each other. The interaction between the two rings true even as they become involved in an art heist at the Museum of Modern Art.”
— Trish Brown, Hooray for Books!, Alexandria, VA

Marvin lives with his family under the kitchen sink in the Pompadays' apartment. He is very much a beetle. James Pompaday lives with his family in New York City. He is very much an eleven-year-old boy.After James gets a pen-and-ink set for his birthday, Marvin surprises him by creating an elaborate miniature drawing. James gets all the credit for the picture and before these unlikely friends know it they are caught up in a staged art heist at the Metropolitan Museum of Art that could help recover a famous drawing by Albrecht Dürer. But James can't go through with the plan without Marvin's help. And that's where things get really complicated (and interesting!). This fast-paced mystery will have young readers on the edge of their seats as they root for boy and beetle.

In Shakespeare's Secret Elise Broach showed her keen ability to weave storytelling with history and suspense, and Masterpiece is yet another example of her talent. This time around it's an irresistible miniature world, fascinating art history, all wrapped up in a special friendship— something for everyone to enjoy.

Elise Broach is the New York Times bestselling author of Masterpiece, Shakespeare’s Secret and Desert Crossing, Missing on Superstition Mountain, the first book in the Superstition Mountain Trilogy, as well as several picture books. Her books have been selected as ALA notable books, Junior Library Guild selections, a Publishers Weekly Best Children’s Book, a New York Public Library Best Book for the Teenage, an IRA Teacher’s Choice, an E.B. White Read Aloud Award, and nominated for an Edgar Award, among other distinctions.

Ms. Broach holds undergraduate and graduate degrees in history from Yale University. She was born in Georgia and lives in the woods of rural Connecticut, walking distance from three farms, a library, a post office and two country stores.

Davidson has appeared extensively on stage, appearing on Broadway in Epic Proportions, Kennedy Center’s production of Cat on a Hot Tin Roof On Broadway, and Off-Broadway in Manhattan Theater Club’s La Terasse. On screen, Davidson has appeared in films including Salt, Little Chenier, Deprivation, and Skeletons in the Closet, and he wrote and directed the film Tickling Leo. He has appeared on numerous television shows, including Army Wives, Law & Order, Brothers & Sisters, The Kill Point, Cold Case, Without a Trace, Boston Legal, and Ally McBeal.