Once Upon an Eid: Stories of Hope and Joy by 15 Muslim Voices (Paperback) 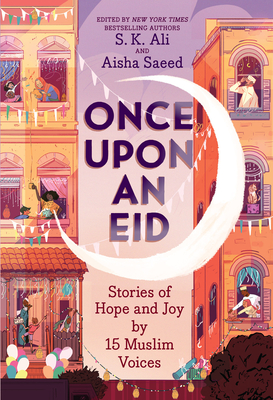 Eid! The short, single syllable word conjures up a variety of feelings and memories for Muslims. Maybe it’s waking up to the sound of frying samosas or the comfort of bean pie, maybe it’s the pleasure of putting on a new outfit for Eid prayers, or maybe it’s the gift giving and the holiday parties, or carnival rides to come that day. Whatever it may be, for those who cherish this day of celebration, the emotional responses may be summed up in another short and sweet word: joy.
Contributors include G. Willow Wilson, Hena Khan, N. H. Senzai, Hanna Alkaf, Rukhsana Khan, Randa Abdel-Fattah, Ashley Franklin, Jamilah Thompkins-Bigelow, Candice Montgomery, Huda Al-Marashi, Ayesha Mattu, Asmaa Hussein, and Sara Alfageeh.

Aisha Saeed is an award-winning and New York Times bestselling author of books for children. Her middle-grade novel Amal Unbound received multiple starred reviews and was a Global Read Aloud for 2018. Her picture book, Bilal Cooks Daal, received an APALA honor, and she was the co-editor of the critically acclaimed Once Upon an Eid. Aisha is also a founding member of the non-profit We Need Diverse Books™. She lives in Atlanta, Georgia, with her family. Huda Al-Marashi is the author of the bestselling memoir First Comes Marriage: My Not-So-Typical American Love Story. Her other writing has appeared in various anthologies and news outlets, such as the New York Times, Washington Post, LA Times, and al Jazeera. She is currently a fellow with the Highlights Foundation Muslim Storytellers Program, and Grounded is her first novel for young readers. She lives in San Diego, California, with her family. Jamilah Thompkins-Bigelow is a Philadelphia-based bestselling children’s book author. Her books, which center around Black and Muslim kids, have been recognized by many including TIME and NPR, and she is an Irma Black Award silver medalist. A former teacher and forever educator-at-heart, she is probably most proud that her picture book Your Name Is a Song was named the December 2021 NEA Read Across America book and that it is included in the curriculums of major school districts throughout the United States. S. K. Ali is the New York Times bestselling and award-winning author of several books, including the Morris Award finalist Saints and Misfits and Love from A to Z, both named as top ten YA titles of the year by various media including Entertainment Weekly and Kirkus Reviews. Her newest novel, Misfit in Love, is on People magazine’s Best Books of Summer 2021 list. Her other books include the critically acclaimed middle-grade anthology Once Upon an Eid and the New York Times bestselling picture book The Proudest Blue.

**STARRED REVIEW**
"This special anthology about family traditions, sharing meals, giving presents, and delighting in the cultural uniqueness of people all over the world isn’t just for those who celebrate Eid; it’s for all who want to share and learn about the holidays."
— Booklist

**STARRED REVIEW**
"The diversity within the collection is impressive, including several blended families and a recently converted one, and while the writing varies in style and quality, each story is engaging, full of emotion and thought. . . This thoughtful and uplifting volume will keep readers turning pages year-round; here's to many more."
— Kirkus Reviews

**STARRED REVIEW**
"Emotions seem to spill straight off the pages in this absolute triumph of a celebratory anthology."
— School Library Connection

**STARRED REVIEW**
"A joyous title that radiates love. This much-needed collection is recommended as a first purchase for all libraries."
— School Library Journal

"A delightful and varied collection of stories for middle-grade readers showcases a cross-section of Muslim experiences of the joyous Eid holidays."
— Shelf Awareness

"Joyful reunions, irritating relatives, fancy clothes, and special, heartfelt gifts appear in many of the tales, giving an overall tone of warmth and playfulness, and even the stories that take a more somber approach end with possibilities of hope and optimism."
— Bulletin of the Center for Children's Books