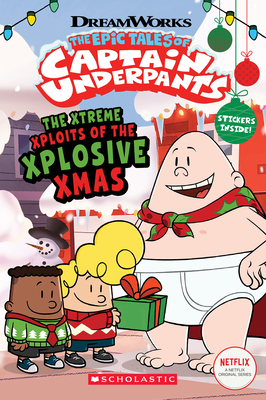 George and Harold love Christmas, but they've decided that the old traditions could use an upgrade. Their solution? Blissmas -- a cooler, more modern version of Christmas, including a Mechalition Derby, holi-DJs instead of Christmas carols, lasers instead of twinkle lights, and a totally jacked Santa Claus.

But as with all of George and Harold's genius ideas, Blissmas has some unexpected consequences. If they don't act fast, Christmas could be gone forever! Can Captain Underpants defeat Mechanaclaus and save the holidays?

This hilarious young graphic novel is based on the "Mega Blissmas" holiday special of The Epic Tales of Captain Underpants TV show, now streaming on Netflix.

MEREDITH RUSU is the author of more than fifty children’s books, specializing in titles based on television and movies such as LEGO ® Ninjago, Peppa Pig®, and Star Wars ®. She is also the author of The DATA Set series under the name Ada Hopper. Meredith lives in New Jersey with her husband and two young sons who provide much of the inspiration for her writing. When she isn’t working, Meredith enjoys karaoke, spending time with family, and going on the occasional adventure or two.