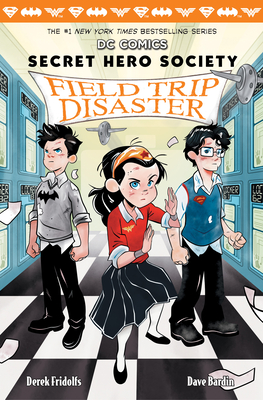 By Derek Fridolfs, Dave Bardin (Illustrator)
$12.99
On Our Shelves Now

This is book number 5 in the DC Comics: Secret Hero Society series.

When a foreign exchange student arrives at Justice Prep, Diana is excited to greet her! While Clark (Superman) is also curious to meet this shy student, Bruce (Batman) is wary. Bruce's suspicions are warranted when they are unable to find any record that this student even exists. When the three confront her, an accident transports them all the way to the 31st century! Now Diana, Clark, and Bruce get to meet the heroes of tomorrow... the Legion of Super Students!

Our displaced time-traveling heroes will struggle to grasp future technology, homework assignments, and most importantly -- bullies. Especially one in particular who has a plan to go back in time and change the course of history! It's up to Clark, Diana, and Bruce to stop this villainous plan before it happens, and find their way back home in this newest Secret Hero Society adventure!