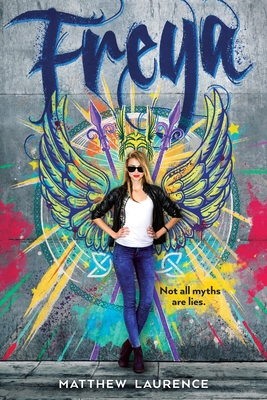 By Matthew Laurence
Email or call for price.
Hard to Find - Not Available for Web Order

This is book number 1 in the Freya series.

There's far more to Sara Vanadi than meets the eye. In her prime, she was Freya, the Norse goddess of love, beauty, war, and death - though that past hardly seems to matter now. For an ancient goddess in the 21st century, true believers - and the strength they bring - are painfully hard to find. But when a new, rising power threatens to remake the world by bending the divine to its will, Sara realizes her days of hiding have ended, and a chance to claw her way out of the history books has arrived. She'll just need new clothes and a manicure before she gets started.

Blending elements of fantasy and scifi in a modern-world setting, the first novel in this new young adult series by Matthew Laurence is perfect for fans of Buffy the Vampire Slayer.

A writer and game designer for over eight years, Matthew Laurence is dedicated to creating great entertainment. His career has taken him from Orlando and San Francisco all the way to Helsinki, Finland as part of Rovio, the makers of Angry Birds. Besides playing games of all kinds, Matthew writes and cooks for fun, travels with his wife whenever (and wherever) possible, and maintains an unhealthy relationship with Netflix. He is the author of Freya.

"Boatloads of action, villains who are at once familiar and original in their quests for world domination, and a savvy team of multireligious goddesses make for a kick-ass adventure situated between science and belief." —The Bulletin of the Center for Children's Books (BCCB)