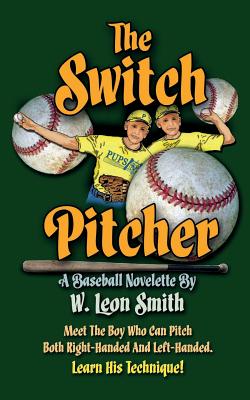 What happens when a young baseball player, out of necessity, learns to pitch both right- and left-handed? This novelette explores his techniques and the challenges that erupt on and off the field when he becomes "ambi-disastrous" on the mound. Although written with a younger readership in mind, baseball fans of all ages find The Switch Pitcher thrilling, as they do with the five bonus short stories. Aldo Vidali, an 84-year-old collaborator of one of cinema's greatest directors: Federico Fellini, wrote a review of the first edition of The Switch Pitcher, and urged it be made into a motion picture. "Children, parents, and grandparents would flock to see such a movie," he said. Among the bonus features is a short story about a sunflower living in a keyhole garden that literally "comes to life." The second short story is a non-fiction account of an encounter with a UFO wherein the subject about thirty years later recounts details of the event while under hypnosis. In the feature entitled ROD & REEL SNAPSHOTS, the author recounts unique fishing expeditions. Another non-fiction entry is about growing up with a magical teddy bear named Fleddie Peddie. The fifth short story, entitled PERIPHERAL ACCELERATON, is about an elderly man who is a perfectionist. He shares his extreme attention to detail with a friend, proving, for instance, the idea that it is extremely intelligent people who become carsick. He also recounts what it is truly like to be a time traveler.

W. LEON SMITH is the author of several books. A native of Central Texas, he has edited and published many newspapers over a 30-year period and is an accomplished reporter, photographer, investigator, landscaper, and keyhole gardener. He is former owner/operator of a movie theatre, has been a state-licensed irrigator, and was elected to several terms as a mayor of a small city. One of his companies, Keyhole Farm, LLC, manufactures keyhole garden kits. www.keyholefarm.com He is publisher of the highly acclaimed newspaper The Lone Star Iconoclast. Smith's works have been published in newspapers and magazines worldwide, including appearances in the New York Times, Vanity Fair, and the British Journalism Review, to just name a few. He appeared in the documentary film, Crawford, Texas. His other books include Epitaph, Plant Your Garden In A Keyhole, and The Vigil - 26 Days In Crawford, Texas.