Please Kill Me: The Uncensored Oral History of Punk (Paperback) 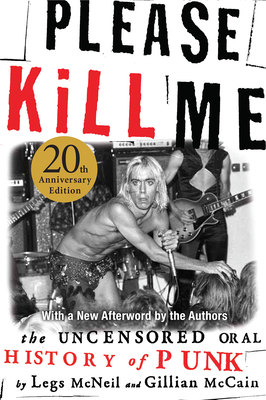 By Legs McNeil, Gillian McCain
$17.00
On Our Shelves Now

I will forever be indebted to my older brother and his fabulous record collection, as he introduced me to The Clash and The Talking Heads. Ever since, I’ve been in love with the punk sound.
Please Kill Me is the definitive chronicle of punk, told in a series of interviews with the people who lived, breathed, and created the music, fashion, and art. It is a raw and unflinching look at punk from its beginnings and early years to its later years and those influenced by it.

"Ranks up there with the great rock & roll books of all time."--Time Out New York "Lurid, insolent, disorderly, funny, sometimes gross, sometimes mean and occasionally touching . . . Resounds with authenticity."--The New York Times "No volume serves juicier dish on punk's New York birth . . . Tales of sex, drugs and music that will make you wish you'd been there."--Rolling Stone A contemporary classic, Please Kill Me is the definitive oral history of the most nihilistic of all pop movements. Iggy Pop, Richard Hell, the Ramones, and scores of other punk figures lend their voices to this decisive account of that explosive era. This 20th anniversary edition features new photos and an afterword by the authors. "Utterly and shamelessly sensational."--Newsday

Legs McNeil lives at the "Schwenksville Narrative Oral History Institute." He was the former Resident Punk at Punk magazine, a senior editor at Spin, and regularly contributes to Vice online. Gillian McCain is the author of two books of poetry. Legs and Gillian's most recent book is Dear Nobody: The True Diary of Mary Rose, and they are currently at work on a new book about the California music and counterculture scenes of the 1960s.