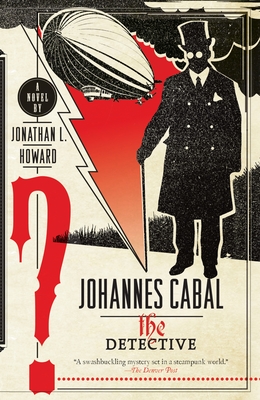 This is book number 2 in the Johannes Cabal Series series.

Johannes is back at it again, and this time he is forced to solve a murder mystery on an aeroship. However because nothing comes easy to him Johannes is on said aeroship due to his need to flee the countryf for "inciting a riot possibly with zombies". If you are in the mood for a hysterical whodunit, a Hercule Poirot mystery with Magic, Mayhem, and Sarcasm then this book is the one for you!

Johannes Cabal returns in this fearfully funny and terrifically twisted tale of murder and international intrigue . . . five thousand feet off the ground.

When an attempt to steal a rare book turns sour, Johannes Cabal, a necromancer of some little infamy, finds himself in a foreign prison awaiting execution. A crafty plan -- as horrific as it is cunning -- allows him to steal the identity of a government official and make his escape aboard a luxurious aeroship heading out of the country. But what should be a perfect getaway rapidly becomes complicated by the bizarre disappearance of a passenger, an attempt on Cabal's life, and an unwelcome face from the past. Trapped aboard with a killer, can even Cabal's open-razor of a mind save him?

Jonathan L. Howard is a game designer who notably co-scripted the first three Broken Sword adventure games. He is the author of the novel Johannes Cabal the Necromancer. He lives near Bristol, England, with his wife and daughter.

"A swashbuckling mystery set in a steampunk world.”—Denver Post

"Cabal, the detective and necromancer, is full of charismatic amorality, making him both a classical, and refreshing antihero."—TimeOut, Chicago

"Definitely entertaining, a cut above many books out there."--Free Lance-Star