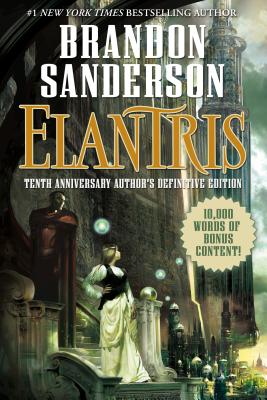 Elantris is a fantastic novel that turns one of the main concepts of fantasy on its head. It asks the question what happens to a magical society when magic suddenly stops working. When all of the people who were once all-powerful wizards are now beginning to fall apart and decay. Set against the backdrop of a brewing religious conflict (which is masterfully written) Elantris is at its heart a story about healing and hope.

In 2005, Brandon Sanderson debuted with Elantris, an epic fantasy unlike any other then on the market. To celebrate its tenth anniversary, Tor is reissuing Elantris in a special edition, a fresh chance to introduce it to the myriad readers who have since become Sanderson fans.

This new edition begins with a preface by author Dan Wells, the first person to read the completed novel, and a new afterword by Sanderson explaining how he came to write the book and its place in the Cosmere, the unified universe of all his Tor novels.

Also included is an expanded version of the "Ars Arcanum" appendix, with more of the technical details of the book's magic that fans can never get enough of.

Elantris was truly a milestone both for Sanderson and for the genre of epic fantasy. It deserves this special treatment, something Tor has done only once before, with Orson Scott Card's Ender's Game. Sanderson fans old and new will be excited to discover it.

“Elantris is a new Ben Hur for the fantasy genre, with a sweeping, epic storyline and well-drawn and sympathetic characters.” —Kevin J. Anderson, New York Times bestselling coauthor of Dune: The Battle Of Corrin

“While every new fantasy author is hailed as unique, new, and different, Brandon Sanderson's Elantris does indeed provide an absorbing adventure in a unique, different, and well-thought-out fantasy world, with a few nifty twists as well.” —L. E. Modesitt, Jr.

“Brandon Sanderson is the real thing--an exciting storyteller with a unique and powerful vision. Elantris is one of the finest debuts I've seen in years.” —David Farland

“Brandon Sanderson's Elantris is a marvelous, magic monster of a book, packed full of intrigue and daring, based around a killer high concept. When the city of the gods becomes a city of the damned, who and what do you believe in? The story twists and turns, characters bait traps for one another as they vie for secular and religious power, and no one is necessarily who or what they seem. Royal houses rise and fall, the fate of all Humanity is in the balance, and maybe, just maybe . . . the gods are coming back. All this and a genuinely touching love story too.” —Simon R. Green, the New York Times bestselling author of the Deathstalker, Nightside and Hawk & Fisher series