Goodnight Nobody: A Novel (Paperback) 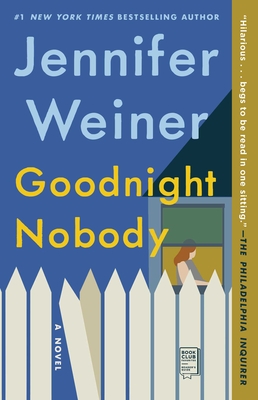 By Jennifer Weiner
$17.00
On Our Shelves Now

New York Times bestselling author Jennifer Weiner’s unforgettable story of adjusting to suburbia—and all the surprises hidden behind its doors.

For Kate Klein, a semi-accidental mother of three, suburbia has been full of unpleasant surprises. Her once-loving husband is hardly ever home. The supermommies on the playground routinely snub her. Her days are spent carpooling and enduring endless games of Candy Land, and at night, most of her orgasms are of the do-it-yourself variety.

When a fellow mother is murdered, Kate finds that the unsolved mystery is the most exciting thing to happen in Upchurch, Connecticut, since her neighbors broke ground for a guesthouse and cracked their septic tank. Even though the local police chief warns her that crime-fighting's a job best left to the professionals, Kate launches an unofficial investigation -- from 8:45 to 11:30 on Mondays, Wednesdays, and Fridays, when her kids are in nursery school.

As Kate is drawn deeper into the murdered woman's past, she begins to uncover the secrets and lies behind Upchurch's picket-fence facade -- and considers the choices and compromises all modern women make as they navigate between marriage and independence, small towns and big cities, being a mother and having a life of one's own.

Jennifer Weiner is the #1 New York Times bestselling author of seventeen books, including Mrs. Everything, the children’s book The Littlest Bigfoot, and an essay collection, Hungry Heart: Adventures in Life, Love, and Writing. A graduate of Princeton University and contributor to the New York Times Opinion section, Jennifer lives with her family in Philadelphia. Visit her online at JenniferWeiner.com.

"Hilarious . . . begs to be read in one sitting." -- Philadelphia Inquirer

"Weiner's got a brilliant eye for social stratum, character sketches, and rendering of suburban atmospherics." -- The Washington Post Book World

"A Peyton Place for the 21st century, only more modern, hip, and funny than the original." -- The Boston Globe

"Weiner's sharp wit, crisp writing, and wry observations are all abundant in Goodnight Nobody." -- Miami Herald