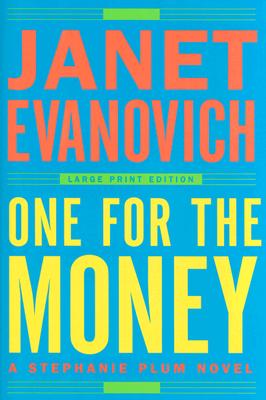 By Janet Evanovich
Email or call for price.
Special Order - Not Available for Web Order

THE BOOK THAT STARTED IT ALL...

Witty, fresh, and full of surprises, One for the Money catapulted Janet Evanovich and her incomparable heroine Stephanie Plum into crime-writing superstardom.

Watch out, world. Here comes Stephanie Plum, a bounty hunter with attitude. She's from the "burg," a blue-collar pocket of Trenton, New Jersey, where cars are American, windows are clean, and dinner is served at six. No exceptions.

Stephanie lives five miles from her parents, trying to sever the world's longest umbilical cord. Mom is a meddler, and eccentric Grandma Mazur is a few cans short of a case. Out of work, Stephanie blackmails her bail bondsman cousin, Vinnie, into giving her a try as an "agent." She knows zilch about the job, but she figures her new pal, fearless bounty hunter Ranger, can teach her whatever it takes.

Her first assignment: nail Joe Morelli, a former cop on the run from a murder charge. He's also the irresistible jerk who took Stephanie's virginity and wrote the details on the bathroom wall of Mario's Sub Shop...and there's still powerful chemistry between the two.

But chasing Joe could prove very dangerous -- while on the case, she encounters Benito Ramirez, a heavyweight boxer known for his brutality to women. His terrifying obsession with Stephanie complicates her manhunt, and it just might lead to murder.

Meet Stephanie Plum in this thrilling, laugh-out-loud outing that made Janet Evanovich a household name.