The Five People You Meet in Heaven (Large Print / Paperback) 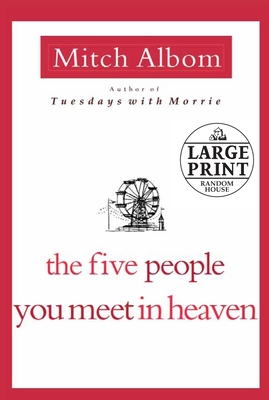 From the author of the number one New York Times bestseller Tuesdays with Morrie comes this long-awaited follow-up.

Eddie is a wounded war veteran, an old man who has lived, in his mind, an uninspired life. His job is fixing rides at a seaside amusement park. On his 83rd birthday, a tragic accident kills him as he tries to save a little girl from a falling cart. He awakes in the afterlife, where he learns that heaven is not a destination. It s a place where your life is explained to you by five people, some of whom you knew, others who may have been strangers. One by one, from childhood to soldier to old age, Eddie s five people revisit their connections to him on earth, illuminating the mysteries of his meaningless life, and revealing the haunting secret behind the eternal question: Why was I here?

A moving and profound contemporary fable, The Five People You Meet in Heaven is an important reminder of the interconnectedness of us all.

Mitch Albom is an internationally renowned author, screenwriter, playwright, nationally syndicated columnist, broadcaster and musician. He is the author of six consecutive number one New York Times bestsellers--including Tuesdays with Morrie and his books have collectively sold more than thirty-five million copies in forty-five languages. Four of his books have been made into Emmy Award-winning and critically-acclaimed television movies. He has founded eight charities in Detroit and Haiti, where he operates an orphanage. He lives with his wife, Janine, in Michigan.