The Professor and the Madman: Unabridged (Audio Cassette) 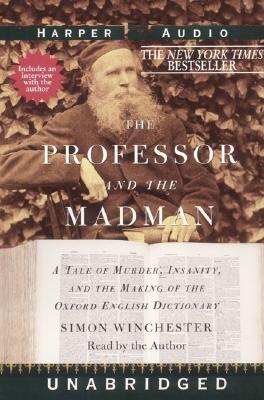 One of the greatest literary achievements in the history of English letters, the creation of the Oxford English Dictionary began in 1857, took seventy years to complete, and drew from tens of thousands of brilliant minds. But hidden within the rituals of its creation is a fascinating and mysterious story.

Professor James Murray was the distinguished editor of the OED project. Dr. William Chester Minor, an American surgeon who had served in the Civil War, was one of thousands of contributors to the dictionary. But Minor was no ordinary contributor. He was remarkably prolific, sending thousands of neat, hand-written quotations from his home. On numerous occasions Murray invited Minor to visit Oxford and celebrate his work, but Murray's offer was regularly, mysteriously, refused.

Finally, a puzzled Murray set out to visit him. It was then that Murray would finally learn the truth about Minor . . . that, in addition to being a masterly wordsmith, Minor was also a murderer, clinically insane - and locked up in Broadmoor, England's harshest asylum for criminal lunatics.

The Professor and the Madman is an extraordinary tale of madness and genius, and the incredible obsessions of two men at the heart of the Oxford English Dictionary and literary history. Written with riveting insight and detail, Simon Winchester delivers a fascinating glimpse into one man's tortured mind and his contribution to another man's magnificent dictionary.