The American Ambassador: A Novel (Paperback) 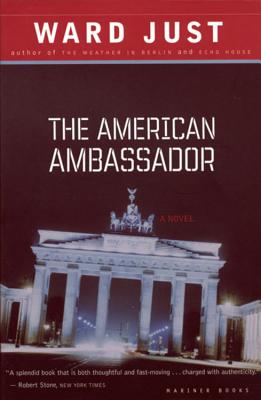 “A gripping international thriller” about a Foreign Service officer—and the son who turns to terrorism to spite him (Los Angeles Times).

William North Jr. inherited his father’s keen political instincts and passion for justice. But the last time Ambassador North saw his son he seemed like a stranger—and a hostile one at that. Now, just as North prepares to take a new post in Germany, reports emerge that Bill Jr. is aligned with a German terrorist organization.

Suddenly, a private conflict between father and son escalates to a matter of national security. North is faced with a terrifying dilemma as loyalty to family and country are directly at odds.

The American Ambassador is at once a riveting tale of suspense and a thoughtful meditation on the fragility of Western values in an age of terrorism.

“Haunting and persuasive . . . Charged with authenticity . . . A splendid book that is both thoughtful and fast-moving.” —The New York Times

WARD JUST (1935-2019) was the author of nineteen novels, including Exiles in the Garden, Forgetfulness, the National Book Award finalist Echo House, A Dangerous Friend, winner of the Cooper Prize for fiction from the Society of American Historians, and An Unfinished Season, winner of the Chicago Tribune Heartland Award and a finalist for the 2005 Pulitzer Prize.

“To make out the jagged intersections of ambition and greed, idealism and sell-out in contemporary politics, you need only turn to . . . The American Ambassador.” —Salon   Praise for Ward Just:   “A master American novelist.” —Vanity Fair     “[Just’s] vision of the people who run the world on our behalf is, for all their conventionality, the most profoundly subtle and, in its insight, the most radical.” —Los Angeles Times Book Review     “There comes a moment . . . when a reader is brought up short by how spectacularly well Ward Just writes fiction . . . Its effect is nearly explosive.” —Boston Globe     “Masterpieces of balance, focus, and hidden order . . . his stories put him in the category reserved for writers who work far beyond the fashions of the times.” —Chicago Tribune    —