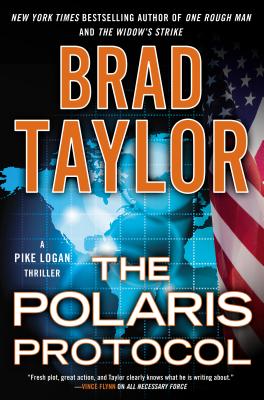 Retired Delta Force commander Brad Taylor returns with the fifth propulsive thriller in his New York Times bestselling Pike Logan series.
Taskforce operators Pike Logan and Jennifer Cahill are used to putting their lives at risk, but in The Polaris Protocol it's Jennifer's brother and countless more innocents who face unfathomable violence and bloodshed.
Pike and Jennifer are in Turkmenistan with the Taskforce a top-secret antiterrorist unit that operates outside US law when Jennifer gets a call from her brother, Jack. Working on an investigative report into the Mexican drug cartels, Jack Cahill has unknowingly gotten caught between two rival groups. His desperate call to his sister is his last before he's kidnapped.
In their efforts to rescue Jack, Pike and Jennifer uncover a plot much more insidious than illegal drug trafficking the cartel that put a target on Jack's back has discovered a GPS hack with the power to effectively debilitate the United States. The hack allows a user to send false GPS signals, making it possible to manipulate everything from traffic signals and banking wire transfers to cruise missiles, but only while the system's loophole remains in place.
With the GPS hack about to be exploited and Jack's life at stake, Jennifer and Pike must find a way to infiltrate the cartel's inner circle and eliminate the impending threat. The price of failure, for both the Taskforce and the country, is higher than ever.

BRAD TAYLOR is the author of the New York Timesbestselling Pike Logan series. He served for more than twenty years in the U.S. Army, including eight years in 1st Special Forces Operational Detachment Delta, commonly known as Delta Force. He retired as a Special Forces lieutenant colonel and now lives in Charleston, South Carolina."

Praise for The Polaris Protocol

“Bestseller Taylor’s fifth Pike Logan thriller takes all the energy of the previous installments and multiplies it by a force factor of 10… A great premise, nonstop action, and one of the baddest villains in the genre... make this a winner.” - Publishers Weekly (starred review)

"Taylor continues to tell exciting action stories with the authenticity of someone who knows the world of special ops. He also has the chops to create terrific characters whom readers will root for. This series just gets better and better." - Booklist

"Admirers of the late Tom Clancy will enjoy this and other works in the series." - Kirkus Reviews

“Fresh plot, great action, and Taylor clearly knows what he is writing about. . . . When it comes to tactics and hardware he is spot-on.”
—Vince Flynn on All Necessary Force

“The high violence level and authentic military action put Taylor, a retired Delta Force officer, solidly in the ranks of such authors as Brad Thor and Vince Flynn.”
—Publishers Weekly

“Readers of novels set in the world of Special Forces have many choices, but Taylor is one of the best.”
—Booklist on Enemy of Mine

“Satisfies from start to finish.”
—Kirkus Reviews on Enemy of Mine