Enemy of Mine (Hardcover) 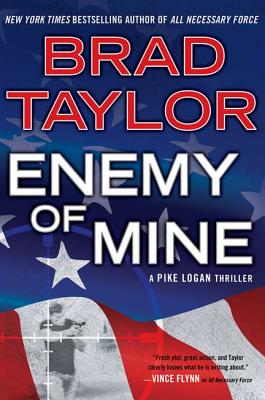 Retired Delta Force officer Brad Taylor returns with the third explosive installment in the Pike Logan thrillers.
In retired Delta Force officer Brad Taylor's third Pike Logan thriller, a tentative peace between Israel and Palestine has been brokered by the United States. But the Taskforce a clandestine team operating outside of US law to protect the country from terrorism gets wind of an assassination attempt on the American envoy sent to solidify the treaty. The Taskforce must devote every resource to saving his life and preventing another bloody outbreak of violence.
Taskforce operator Pike Logan and his partner, Jennifer Cahill, are charged with following the assassin's flimsy trail through the Middle East, a trail that becomes more muddled at every turn. They must contend with terrorist organizations, independent killers, and shaky allies to uncover the biggest threat of all: an American citizen hiding a secret that just may destroy everything, including the Taskforce.
Brad Taylor is the complete package: a writer who understands how to tell a thrilling story, who possesses the knowledge to construct an intricate and utterly believable plot, and who has more than enough on-the-ground experience to back it up. His first two books appeared on bestseller lists nationwide, including "The New York Times," "Publishers Weekly," and" USA Today." Propulsive and compelling, "Enemy of Mine" is sure to join them.

BRAD TAYLOR is the author of the "New York Times"bestselling Pike Logan series. He served for more than twenty years in the U.S. Army, including eight years in 1st Special Forces Operational Detachment Delta, commonly known as Delta Force. He retired as a Special Forces lieutenant colonel and now lives in Charleston, South Carolina."

"Fresh plot, great action, and Taylor clearly knows what he is writing about...When it comes to tactics and hardware he is spot-on."
—Vince Flynn on All Necessary Force

“The high violence level and authentic military action put Taylor, a retired Delta Force officer, solidly in the ranks of such authors as Brad Thor and Vince Flynn.”
— Publishers Weekly on All Necessary Force