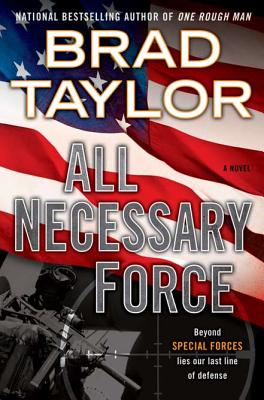 Retired Delta Force officer Brad Taylor whose debut thriller, "One Rough Man," was a national bestseller continues his electrifying Pike Logan series.
A terrorist hit is coming.
The CIA, FBI, and Department of Defense systems have spiked, but traditional intel is going nowhere. It falls to the Taskforce a top secret team that exists outside the bounds of U.S. law and is charged with finding and destroying asymmetric threats to stop the unknown conspirators.
A shadowy trailer leads the Taskforce through Asia and into Egypt, where an attack leaves one hardened Taskforce member dead and another barely breathing. Pike Logan and his partner, Jennifer Cahill, are forced to helm the increasingly convoluted and dangerous mission a mission that tests Jennifer's ability to justify means to an end and Pike's tenuous ability to stay in control. Sifting their way through the opposing plots of two terrorist organizations will turn out to be th least of their problems when a weapon of unthinkable power touches American soil the only country in which Taskforce members are forbidden to operate, and the only country that Pike Logan may be unable to save.
Told with unparalleled realism informed by Taylor's decades of experience in the Special Forces and Delta Force, "All Necessary Force" takes readers on a terrifying and relentless journey.

Brad Taylor, Lieutenant Colonel (ret.), is a twenty-one-year veteran of the U.S. Army Infantry and Special Forces. His first Pike Logan novel, "One Rough Man," was a national bestseller. He lives in Charleston, South Carolina.

"The high violence level and authentic military action put Taylor, a retired Delta Force officer, solidly in the ranks of such authors as Brad Thor and Vince Flynn." -Publishers Weekly

"Terrorists plan to strike America with a vicious blow, and it’s Pike Logan’s job to stop them. This fast-moving thriller poses the dilemma: Must he obey the law, or must he use all necessary force to thwart the enemy?....Well written, edgy and a damn good yarn." -Kirkus Reviews

"Fill your lungs before you start ALL NECESSARY FORCE because it will leave you breathless. "
-Suspense Magazine

“Gritty…Readers will want to hear more of Logan and Cahill.”
-Booklist