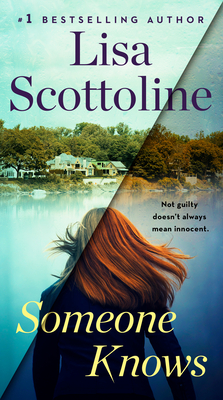 Lisa Scottoline is the New York Times-bestselling author and Edgar Award-winning author of thirty-two novels. She has 30 million copies of her books in print in the United States and has been published in thirty-five countries. Her debut novel, Everywhere that Mary Went, was nominated for an Edgar Award, the most prestigious award given in crime fiction. Since then, she has gone on to write 30 more critically acclaimed novels, and her recent, After Anna, was a #1 bestseller. Scottoline also writes a weekly column with her daughter, Francesca Serritella, for The Philadelphia Inquirer. In addition to writing, Lisa reviews popular fiction and non-fiction, and her reviews have appeared in The New York Times, The Washington Post, and The Philadelphia Inquirer. Lisa has served as President of Mystery Writers of America and has taught a course she developed, "Justice in Fiction" at the University of Pennsylvania Law School, her alma mater. She lives in the Philadelphia area.

“Pure gold….a tour de force, a stunner of a thriller in which ‘knowing’ becomes a wholly subjective term.”—Providence Journal

Praise for Someone Knows and Lisa Scottoline

“[A] heartfelt tale that touches on family, marriage, justice, and how emotional wounds drive the choices people make. Scottoline’s fans will be well satisfied.”—Publishers Weekly

“Scottoline fills the pages with twists and turns and plenty of skeletons in family closets....[fans] will race to the end.”—Booklist

“This fast-paced tale is sure to astonish readers with a huge twist at the end….A gripping page-turner full of gritty suspense.”—Library Journal

“Lisa Scottoline shows once again why she’s the queen of suspense, delivering a relentless, gut-punch of a thriller that’s sure to stand among the year’s best.”—The Real Book Spy

“Someone Knows has all the requisite turmoil, surprises, action and introspection of an enjoyable page-turner.”—Book Reporter

“Lisa Scottoline is one of the very best writers at work today.”—Michael Connelly

“Lisa Scottoline has been added to my shortlist of must-read authors.”—Janet Evanovich

“Scottoline is a powerhouse.”—David Baldacci

“Scottoline writes riveting thrillers that keep me up all night, with plots that twist and turn.”—Harlan Coben

“Scottoline is a star.”—Time Magazine

“A deliciously distracting thriller...Scottoline illuminat[es] the landing strip of revelations and truths in a deliciously slow and intense way.”—The Washington Post

“Once again, Scottoline has written a gripping stand-alone psychological thriller; fans of domestic suspense will snap this one up.”—Library Journal (starred review)

“This twisty thriller about high school secrets and deadly consequences is impossible to put down.”—People

“Scottoline is the master of inventive plots and relatable characters.”—Huffington Post

“This fast-paced read culminates in a daring chase that would play well on the big screen.”—Publishers Weekly

“Scottoline has become the master of understated terror and leaves no stone unturned in crafting a potboiler of rare depth and emotion.”—Providence Journal