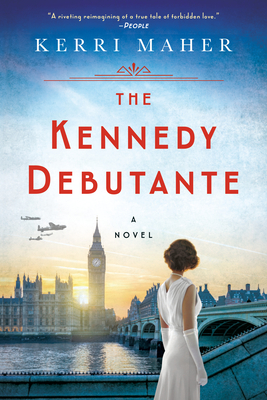 As a lover of all the Kathleen "Kick" Kennedy who has read just about every biography in print about her, I was very intrigued to read about what parts of her life Maher would focus on. And while I was mildly disappointed that she choose to focus almost exclusively on the love story that dominated Kick's early twenties with an English aristocrat, the backdrop of WWII London served as a vivid reminder of how different the times were and how brave Kick was to go against the Kennedy grain and follow her heart. I've already started recommending it to customers I think will enjoy it!

Kerri Maher is the author of The Girl in White Gloves, The Kennedy Debutante, and, under the name Kerri Majors, This Is Not a Writing Manual: Notes for the Young Writer in the Real World. She holds an MFA from Columbia University and was a writing professor for many years. She now writes full-time and lives with her daughter and dog in a leafy suburb west of Boston, Massachusetts.

“Maher’s debut stars a debutante to root for in this moving coming-of-age tale.”
—Kate Quinn, New York Times bestselling author of The Alice Network and The Huntress

“Maher beautifully mixes the red-blooded American iconography of the Kennedys with the delicious and Downton Abbey-esque grandeur of Britain's upper crusts…[Kick] proves a poignant and captivating subject, and her story will make your heart lurch in the best possible ways.”
—Allison Pataki, New York Times bestselling author of The Queen's Fortune

“A vivid and engrossing portrayal of the fascinating life of Kathleen “Kick” Kennedy. Maher offers a dazzling glimpse of London society filled with a rich, nuanced, and infamous cast of characters alongside a poignant depiction of the emotional cost of war. A stunning debut!”
—Chanel Cleeton, New York Times bestselling author of Next Year in Havana, a Reese Witherspoon Book Club Pick

“Kerri Maher has crafted a compelling, insightful look into the complexities of the Kennedy era and one of its most fascinating daughters. Expertly researched, this is a remarkable debut.”
—Susan Meissner, Bestselling author of As Bright as Heaven

“You will be swept up, first and foremost, by its vivid, captivating heroine. Kick Kennedy was naive and privileged, to be sure, but in Maher's masterful portrait, she is also a bold young woman living at a precarious moment in history, eager to make her mark on the world as fearlessly as she will follow her heart.”
—Julia Glass, Author of A House Among the Trees and the National Book Award–winning Three Junes

“An outstanding deep dive into a fascinating person and time. For fans of The Crown, the riveting story of a headstrong American girl captivated by a dashing British aristocrat. I’m blown away.”
—Fiona Davis, New York Times bestselling author of The Lions of Fifth Avenue

“Bursting with vivid details of America and London during wartime, this is an enthralling tale of a bold woman eager to make her mark on the world.”
—Woman’s World

“A well-paced and engaging novel [that will] appeal to fans of TV’s Downton Abbey.”
—USA Today

"Maher’s assured debut, set against the backdrop of World War II, explores the life of JFK’s younger sister Kathleen “Kick” Kennedy...This immersive, rich portrait of a complex young woman from one of the world’s most famous families will hold readers in thrall."
—Publishers Weekly

“An engrossing tale of the importance of family, faith, and love in the life of one remarkable woman.”
—Booklist

Praise for The Girl in White Gloves

“The stunning and very human story of a beloved icon....Full of nuance and poignancy—this novel is gorgeous.”
—Allison Pataki, New York Times bestselling author of The Queen’s Fortune

“A captivating look behind the scenes at the life of the iconic Grace Kelly...as she searches for authenticity in a world clamoring instead for a picture-perfect princess.”
—Marie Benedict, New York Times bestselling author of The Only Woman in the Room

“Daring and deep. Maher successfully lifts the curtain of mystery that surrounded a princess and a movie star, revealing a headstrong, complex woman with a riveting story to tell.”
—Fiona Davis, New York Times bestselling author of The Lions of Fifth Avenue

"In The Girl in White Gloves, Kerri Maher beautifully envisions the reality of this fairy-tale life. This deeply researched novel is perfect for fans of Grace Kelly, royal-watchers, and fans of biographical fiction alike."
—PopSugar

“In this charming, picturesque novel, readers are swept away…this story is a glimpse into the dazzling life of a classic and beloved star.”
—Woman’s World

"Maher's bio-fic feels as if it was written by Kelly herself. The novel spins a fascinating version of the Philly native's life, from princess of Hollywood to Princess of Monaco."
—Philadelphia Magazine

“Compelling and thoughtful....Maher imbues her heroine with grace, passion and strength, giving us a behind-the-scenes look into the sacrifices that Kelly made in becoming not once, but twice, an icon.”
—Bryn Turnbull, Author of The Woman Before Wallis

“[T]his will be a good choice for readers curious about the inner life of a royal. It’s an absorbing take on a complicated life.”
—Library Journal

“A thoughtful and moving book that ably illuminates a struggling albeit determined princess.”
—BookTrib

“A story about the actual Grace Kelly…Maher humanizes her and provides a glimpse into a world that looks far different from what the media portrayed it to be when she was alive.”
—Bookreporter

“There is much to relish about this well-researched, riveting tale.”
—Booklist

“Maher's compulsively readable portrait of a woman hungry to find her place in the world.”
—Greer Macallister, USA Today bestselling author of The Magician's Lie and Woman 99

“The riveting story of a woman who everyone thought had it all, who in fact struggled and sacrificed to find her own happiness.”
—Stephanie Thornton, USA Today bestselling author of And They Called It Camelot

“The Girl in White Gloves is a captivating novel of love, family, and the cost of regret. I devoured it one sitting!”
—Heather Webb, USA Today bestselling coauthor of Meet Me in Monaco

“Elegant and romantic...an engrossing journey of transformation, complete with familial tension, betrayal, and redemption.”
—Elise Hooper, Author of The Other Alcott

“In this moving, bittersweet, and deeply honest novel, the real woman behind the myth that is Grace Kelly—glamorous movie star and fairy-tale princess - comes to full-throated life. We are held spellbound by her artistry, desire, thwarted dreams, and indefatigable will.”
—Sarah-Jane Stratford, Author of Red Letter Days

“A fabulous page-turner, full of joy and heartbreak and all the elegance and adventure that Grace embodied. This perceptive look at the beautiful woman who sacrificed everything for her talent and ambition, and then sacrificed her career for love, is as thrilling as one of Grace's own screen performances, with the perfect balance of passion and vulnerability. I loved this book!”
—Jeanne Mackin, Author of The Last Collection

“A perfect jewel of a novel. While this is very much Kelly’s story, it’s Maher’s broader themes of challenging expectations and finding one’s voice that set this book apart. She has definitely earned her spot on my auto-read list.”
—Alix Rickloff, Author of The Way to London

“Anyone who loves the glamour of classic movies will love The Girl in White Gloves. Kerri Maher transforms Grace Kelly from a legendary screen idol into a real and relatable woman. I was captivated by Grace’s struggle for personal and professional acceptance, and her search for balance between ambition and family.”
—Georgie Blalock, Author of The Other Windsor Girl