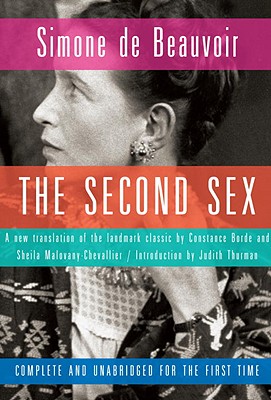 Newly translated and unabridged in English for the first time, and brilliantly introduced by Judith Thurman, Simone de Beauvoir's masterpiece weaves together history, philosophy, economics, biology, and a host of other disciplines to analyze the Western notion of "woman" and to explore the power of sexuality. Sixty years after its initial publication, The Second Sex is still as eye-opening and pertinent as ever. This triumphant and genuinely revolutionary book began as an exceptional woman's attempt to find out who and what she was. Drawing on extensive interviews with women of every age and station of life, masterfully synthesizing research about women's bodies and psyches as well as their historic and economic roles, The Second Sex is an encyclopedic and cogently argued document about inequality and enforced "otherness." This long-awaited new translation pays particular attention to the existentialist terms and French nuances that may have been misconstrued in the first English edition; restores Beauvoir's phrasing, rhythms, and tone; and reinstates significant portions of the "Myths" and "History" chapters that were originally cut due to length, including accounts of more than seventy female figures. A vital and life-changing work that has dramatically revised the way women talk and think about themselves, Beauvoir's magisterial treatise continues to provoke and inspire.

Simone de Beauvoir was born in Paris in 1908. In 1929 she became the youngest person ever to obtain the agregation in philosophy at the Sorbonne, placing second to Jean-Paul Sartre. She taught at lycees at Marseille and Rouen from 1931 to 1937, and in Paris from 1938 to 1943. After the war, she emerged as one of the leaders of the existentialist movement, working with Sartre on Les Temps Modernes. The author of several books, including The Mandarins (1957), which was awarded the Prix Goncourt, Beauvoir was one of the most influential thinkers of her generation. She died in 1986. Constance Borde and Sheila Malovany-Chevallier, both American, are longtime residents of France and former teachers at the Institut d'Etudes Politiques in Paris. Judith Thurman, author of Isak Dinesen and Secrets of the Flesh: A Life of Colette, is a staff writer at The New Yorker.

Praise from the UK for the new edition of The Second Sex:

“[A] masterpiece. . . . Restores essential passages that have been missing for 60 years.” —The Times

“Groundbreaking. . . . A fresh, much expanded, more intelligible book which repays re-reading by adherents of the old version, and cries out for attention from young women who have not been exposed to this most powerful of feminist thinkers. The Second Sex [is] the foundation text of second-wave feminism. It is probably the most important and influential philosophical treatise of the 20th century.” —The Irish Times

“The Second Sex is an inquiry into a subject with profound implications for the entire human race, and its ideas are as fresh and inspiring as they were when [Beauvoir] began work. . . . Now Beauvoir’s great work is available in a full English translation for the first time. . . . It is a fine piece of work, a lucid translation.” —The Independent