Our Man in Havana (Paperback) 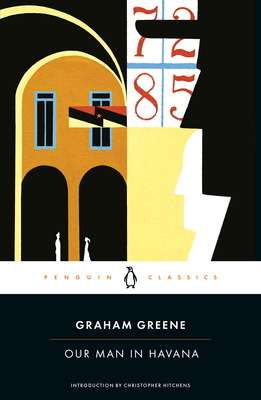 MI6’s man in Havana is Wormold, a former vacuum-cleaner salesman turned reluctant secret agent out of economic necessity. To keep his job, he files bogus reports based on Charles Lamb’s Tales from Shakespeare and dreams up military installations from vacuum-cleaner designs. Then his stories start coming disturbingly true…

First published in 1959 against the backdrop of the Cold War, Our Man in Havana remains one of Graham Greene’s most widely read novels. It is an espionage thriller, a penetrating character study, and a political satire of government intelligence that still resonates today. This Penguin Classics edition features an introduction by Christopher Hitchens.

Graham Greene (1904-1991), whose long life nearly spanned the length of the twentieth century, was one of its greatest novelists. Educated at Berkhamsted School and Balliol College, Oxford, he started his career as a sub-editor of the London Times. He began to attract notice as a novelist with his fourth book, Orient Express, in 1932. In 1935, he trekked across northern Liberia, his first experience in Africa, told in A Journey Without Maps (1936). He converted to Catholicism in 1926, an edifying decision, and reported on religious persecution in Mexico in 1938 in The Lawless Roads, which served as a background for his famous The Power and the Glory, one of several “Catholic” novels (Brighton Rock, The Heart of the Matter, The End of the Affair). During the war he worked for the British secret service in Sierra Leone; afterward, he began wide-ranging travels as a journalist, which were reflected in novels such as The Quiet American, Our Man in Havana, The Comedians, Travels with My Aunt, The Honorary Consul, The Human Factor, Monsignor Quixote, and The Captain and the Enemy. As well as his many novels, Graham Greene wrote several collections of short stories, four travel books, six plays, two books of autobiography, A Sort of Life and Ways of Escape, two biographies, and four books for children. He also contributed hundreds of essays and film and book reviews to The Spectator and other journals, many of which appear in the late collection Reflections. Most of his novels have been filmed, including The Third Man, which the author first wrote as a film treatment. Graham Greene was named Companion of Honour and received the Order of Merit among numerous other awards.

Christopher Hitchens is a widely published polemicist and frequent radio and TV commentator.  He is the author of many books, including Why Orwell Matters, Letters to a Young Contrarian, The Trial of Henry Kissinger, as well as books on Cyprus, Kurdistan and Palestine, including Blaming the Victims coedited with Edward Said.  He is a contributing editor to Vanity Fair and writes for, among others, Slate, The Atlantic Monthly, The New York Times Book Review, and The Washington Post.  He lives with his family in Washington, D.C.

As comical, satirical, atmospherical an ÆentertainmentÆ as he has given us. (The Daily Telegraph, London)