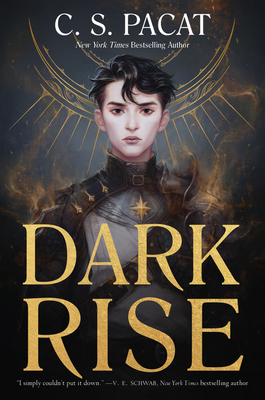 This is book number 1 in the Dark Rise series.

Like V.E. Schwab’s A Darker Shade of Magic and Shelby Mahurin’s Serpent & Dove, Dark Rise is more than just high intrigue fantasy—it’s fast-paced, action-packed, and completely surprising. Readers will love exploring the rich setting of nineteenth-century London. This thrilling story of friendship, deception, loyalty, and betrayal is sure to find a passionate audience of readers.

C. S. Pacat is the bestselling author of the Captive Prince trilogy and the graphic novel series Fence. She lives in Melbourne, Australia. Find her online at www.cspacat.com.

“A story rendered with devastatingly brilliant detail. Dark Rise pulls you by the hand into a dangerous, mighty world. You won’t be able to look away.” — Chloe Gong, New York Times Bestselling Author of These Violent Delights

"Intricate and immersive. A wonderfully tangled adventure story with a Chosen One who keeps you guessing."  — Rainbow Rowell, bestselling author of the Simon Snow Trilogy

“A taut, captivating fantasy worth every ounce of the hype.” — Popsugar

"Pacat is a master at character design, and you’ll instantly fall in love.”  — Tor.com

“Lush, dark and dangerous. A YA fantasy that begins breathlessly and rarely lets up. Dark Rise is perfect for fans of Six of Crows by Leigh Bardugo or The Cruel Prince by Holly Black."  — Books + Publishing

“Will hook readers until the last page. Characters could entice you on one page, the stick a knife through your heart in the next.” — The Nerd Daily