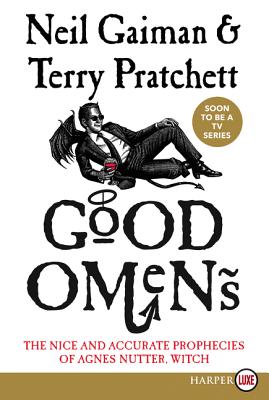 By Neil Gaiman, Terry Pratchett
$19.99
Email or call for price.

Good Omens is a wonderful treat and an hystical fantasy masterpiece from two powerhouse authors. From the very first page where each of the many characters are introduced, the wit and humor is evident. So join Crowley and Aziraphale as they search for the missing anti-Christ and save the world!

"Good Omens . . . is something like what would have happened if Thomas Pynchon, Tom Robbins and Don DeLillo had collaborated. Lots of literary inventiveness in the plotting and chunks of very good writing and characterization. It’s a wow. It would make one hell of a movie. Or a heavenly one. Take your pick."—Washington Post

According to The Nice and Accurate Prophecies of Agnes Nutter, Witch (the world's only completely accurate book of prophecies, written in 1655, before she exploded), the world will end on a Saturday. Next Saturday, in fact. Just before dinner.

So the armies of Good and Evil are amassing, Atlantis is rising, frogs are falling, tempers are flaring. Everything appears to be going according to Divine Plan. Except a somewhat fussy angel and a fast-living demon—both of whom have lived amongst Earth's mortals since The Beginning and have grown rather fond of the lifestyle—are not actually looking forward to the coming Rapture.

And someone seems to have misplaced the Antichrist . . .

Sir Terry Pratchett was the internationally bestselling author of more than thirty books, including his phenomenally successful Discworld series. His young adult novel, The Amazing Maurice and His Educated Rodents, won the Carnegie Medal, and Where's My Cow?, his Discworld book for “readers of all ages,” was a New York Times bestseller. His novels have sold more than seventy five million (give or take a few million) copies worldwide. Named an Officer of the British Empire “for services to literature,” Pratchett lived in England. He died in 2015 at the age of sixty-six.

“The Apocalypse has never been funnier.” — Clive Barker

“Reads like the Book of Revelation, rewritten by Monty Python.” — San Francisco Chronicle

“It could be called The Hitchhiker’s Guide to Armargeddon.” — Palm Beach Post

“Full-bore contemporary lunacy. A steamroller of silliness that made me giggle out loud.” — San Diego Union-Tribune

“A direct descendant of The Hitchhiker’s Guide to the Galaxy.” — New York Times

“Outrageous . . . read it for a riotous good laugh!” — Orlando Sentinel

“A slapstick Apocalypse, a grinning grimoire, a comic Necronomicon, a hitchhiker’s guide to the netherworld.” — James Morrow, author of Only Begotten Daughter

“One Hell of a funny book.” — Gene Wolfe

“Something like what would have happened if Thomas Pynchon, Tom Robbins and Don DeLillo had collaborated.” — Washington Post