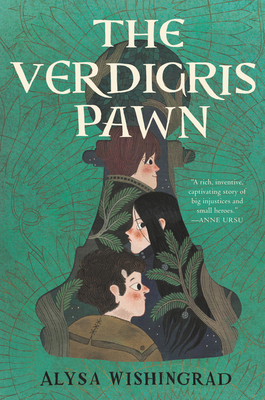 A wonderful story set in an expertly crafted fantastical setting THE VERDIGRIS PAWN is a true delight to read. With elements of both modern and classic quests and characters that you'll want to follow anywhere, this is a story that pulls you in and won't let go. Adventure and friendship combine to create an absolute joy of a book!

A boy who underestimates his power . . .

The heir to the Land should be strong. Fierce. Ruthless. At least, that’s what Beau’s father has been telling him his whole life, since Beau is the exact opposite of what the heir should be. With little control over his future, Beau is kept locked away, just another pawn in his father’s quest for ultimate power.

That is, until Beau meets a girl who shows him the secrets his father has kept hidden. For the first time, Beau begins to question everything he’s ever been told and sets off in search of a rebel who might hold the key to setting things right.

Teaming up with a fiery runaway boy, their mission quickly turns into something far greater as sinister forces long lurking in the shadows prepare to make their final move—no matter what the cost. But it just might be Beau who wields the power he seeks . . . if he can go from pawn to player before the Land tears itself apart.

Alysa Wishingrad spent many years working in theater, film, and TV before returning to her roots as a writer. When she’s not writing she’s probably out walking her dogs, taking a run, or seeing as much theater as she possibly can. Alysa lives in the Hudson Valley of New York with her family, two dogs and three cats. The Verdigris Pawn is her debut novel. Visit her at www.alysawishingrad.com.

A rich, inventive, captivating story of big injustices and small heroes, The Verdigris Pawn nods to classic fantasy while asking questions deeply relevant to our world. A magical adventure that readers will adore.
— Anne Ursu, author of The Lost Girl

Heartfelt, hopeful, and charming, The Verdigris Pawn is a deftly crafted tale that weaves adventure with purpose, beautifully illustrating how kids can change the world.
— Heather Kassner, author of The Plentiful Darkness


The Verdigris Pawn is a wonderful escape, a tale of truth, trust, and doing what’s right. Readers will delight in this fast-paced fantasy in which mistakes can be opportunities, power is not what it seems, and the seemingly helpless can have the greatest impact of all. A perfect debut for our times.
— Diane Magras, award-winning author of The Mad Wolf's Daughter

With vibrant characters readers can’t help but cheer for, Wishingrad’s debut is a tribute to the beauty of both language and story. Filled with magic, suspense, and a shifting landscape of who is friend and who is foe, The Verdigris Pawn expertly explores the double-edged swords of power, loyalty and righteousness. A gorgeous and unforgettable book.
— Rebecca K.S. Ansari, author of The Missing Piece of Charlie O’Reilly and The In-Between