You Say It First (Paperback) 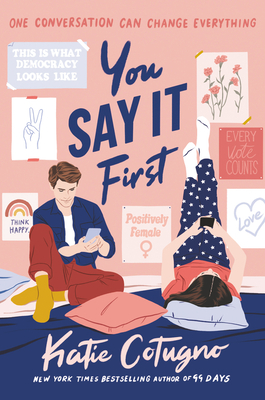 An addictive, irresistible YA novel about two teens from different worlds who fall for each other after a voter registration call turns into a long-distance romance—from Katie Cotugno, the New York Times bestselling author of 99 Days. Perfect for fans of Mary H.K. Choi, Robin Benway, and Nicola Yoon.

One conversation can change everything.

Meg has her entire life set up perfectly: she and her best friend, Emily, plan to head to Cornell together in the fall, and she works at a voter registration call center in her Philadelphia suburb. But everything changes when one of those calls connects her to a stranger from small-town Ohio.

Colby is stuck in a rut, reeling from a family tragedy and working a dead-end job. The last thing he has time for is some privileged rich girl preaching the sanctity of the political process. So he says the worst thing he can think of and hangs up.

But things don’t end there.…

That night on the phone winds up being the first in a series of candid, sometimes heated, always surprising conversations that lead to a long-distance friendship and then—slowly—to something more. Across state lines and phone lines, Meg and Colby form a once-in-a-lifetime connection. But in the end, are they just too different to make it work?

You Say It First is a propulsive, layered novel about how sometimes the person who has the least in common with us can be the one who changes us most.

Katie Cotugno is the New York Times bestselling author of seven romantic young adult novels, including 99 Days and You Say It First, and is the co-author, with Candace Bushnell, of Rules for Being a Girl. Her books have been honored by the Junior Library Guild, the Bank Street Children’s Book Committee, and the Kentucky Association of School Librarians, among others, and translated into more than fifteen languages.  Katie is a Pushcart Prize nominee whose work has appeared in The Iowa Review, The Mississippi Review, and Argestes, as well as many other literary magazines. She studied Writing, Literature and Publishing at Emerson College and received her MFA in Fiction at Lesley University. She lives in Boston with her family.

“Cotugno's latest slow-burn romance digs deep…. Thoughtful and thought-provoking, this is a must-read for teens questioning their futures or their own hearts.”
— ALA Booklist (starred review)

“A realistic and captivating story that speaks to the issues relevant to teens today….Romance, politics, family drama, and more—this one has it all.”
— Kirkus Reviews

“Cotugno writes with equal sympathy about opinionated characters with differing life experiences and worldviews. For collections where the smart-girl romances of Miranda Kenneally, Jenny Han, and Nandini Bajpai do well.”
— School Library Journal

"In You Say It First, Katie Cotugno explores the messy victories and sweet imperfections of falling in love across party lines. Meg and Colby are brave and scared, flawed yet true to themselves, and as their relationship grows, we see how the wrong person can come along at exactly the right time. Katie's writing is always full of empathy, humor, and hope, and this book is no different. I absolutely loved it."
— Robin Benway, National Book Award-winning and New York Times bestselling author of Far From the Tree