Her Every Fear: A Novel (Paperback) 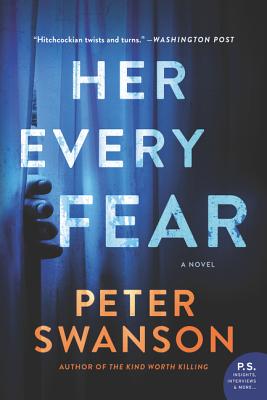 “Swanson builds tension in Her Every Fear like a chess grandmaster slowly revealing his game. Kate Priddy tries to escape her dark past with a move to Boston, only to discover that she is not the only one trying to hide their secrets, and that many are darker than her own. Moving seamlessly between each character's point of view, Swanson's heart-stopping thriller draws readers into this terrifying and twisted tale of revenge and holds them until the surprising end.”
— Luisa Smith (E), Book Passage, Corte Madera, CA

An NPR Best Book of the Year

The author of the wildly popular The Kind Worth Killing returns with an electrifying and downright Hitchcockian psychological thriller—as tantalizing as the cinema classics Rear Window and Wait Until Dark—involving a young woman caught in a vise of voyeurism, betrayal, manipulation, and murder.

Growing up, Kate Priddy was always a bit neurotic, experiencing momentary bouts of anxiety that exploded into full blown panic attacks after an ex-boyfriend kidnapped her and nearly ended her life. When Corbin Dell, a distant cousin in Boston, suggests the two temporarily swap apartments, Kate, an art student in London, agrees, hoping that time away in a new place will help her overcome the recent wreckage of her life.

But soon after her arrival at Corbin’s grand apartment on Beacon Hill, Kate makes a shocking discovery: his next-door neighbor, a young woman named Audrey Marshall, has been murdered. When the police question her about Corbin, a shaken Kate has few answers, and many questions of her own—curiosity that intensifies when she meets Alan Cherney, a handsome, quiet tenant who lives across the courtyard, in the apartment facing Audrey’s. Alan saw Corbin surreptitiously come and go from Audrey’s place, yet he’s denied knowing her. Then, Kate runs into a tearful man claiming to be the dead woman’s old boyfriend, who insists Corbin did the deed the night that he left for London.

When she reaches out to her cousin, he proclaims his innocence and calms her nerves . . . until she comes across disturbing objects hidden in the apartment—and accidently learns that Corbin is not where he says he is. Could Corbin be a killer? And what about Alan? Kate finds herself drawn to this appealing man who seems so sincere, yet she isn’t sure. Jetlagged and emotionally unstable, her imagination full of dark images caused by the terror of her past, Kate can barely trust herself . . . So how could she take the chance on a stranger she’s just met?

Yet the danger Kate imagines isn’t nearly as twisted and deadly as what’s about to happen. When her every fear becomes very real.

And much, much closer than she thinks.

Told from multiple points of view, Her Every Fear is a scintillating, edgy novel rich with Peter Swanson’s chilling insight into the darkest corners of the human psyche and virtuosic skill for plotting that has propelled him to the highest ranks of suspense, in the tradition of such greats as Gillian Flynn, Paula Hawkins, Patricia Highsmith, and James M. Cain.

Peter Swanson is the author of six novels, including The Kind Worth Killing, winner of the New England Society Book Award, and finalist for the CWA Ian Fleming Steel Dagger; Her Every Fear, an NPR book of the year; Before She Knew Him, and his most recent, Eight Perfect Murders. His books have been translated into 30 languages, and his stories, poetry, and features have appeared in Asimov’s Science Fiction, The Atlantic Monthly, Measure, The Guardian, The Strand Magazine, and Yankee Magazine. He lives outside of Boston, where he is at work on his next novel.

“Most readers won’t anticipate the Hitchcockian twists and turns in this standout suspense tale.”
— Washington Post

“Chapter by chapter, the text peels back layers to reveal a pathological relationship between Kate’s cousin and a long-ago acquaintance that’s reminiscent of a folie à deux out of Patricia Highsmith... By then, readers, privy to much Kate doesn’t know, may be experiencing their own anxiety.”
— Wall Street Journal on Her Every Fear

“Peter Swanson tells the engaging story of a woman battling severe anxiety who decides to radically change her life - and the horrifying results that follow - in Her Every Fear… An effective and compulsive thriller.”
— St. Louis Post Dispatch

“[It] has ‘movie adaptation’ written all over it. It has an alluring location, a fragile yet resilient protagonist and a thoroughly Hitchcockian storyline, replete with the requisite false starts and plot twists… High tension, lightning-fast pacing and psychological drama in spades.”
— BookPage on Her Every Fear

“Psychological thriller devotees should block time to read Swanson’s (The Kind Worth Killing) novel in one sitting, preferably in the daylight. Readers can expect the hairs on their necks to stand straight up as they are consumed with a full-blown case of heebie-jeebies.”
— Library Journal (starred review)

“The attractive young woman at the heart of this white-knuckle novel, has many fears-mostly justified… Swanson, who also wrote The Girl with a Clock for a Heart and The Kind Worth Killing, has quickly established himself as today’s master of the suspense novel.”
— Otto Penzler, LitHub.com on Her Every Fear

“Peter Swanson’s third thriller cracks to life in the opening pages. His characters are engaging, and the reader is treated to multiple points of view... The payoff for the reader is an excellent whodunit with a magical appeal for the mystery thriller lover.”
— Seattle Book Review on Her Every Fear

“I loved it! A brilliantly original premise, delivered with panache.”
— Clare Mackintosh, author of I Let You Go on Her Every Fear

“Did you like the film Rear Window? I did, and turning the pages of Peter Swanson’s HER EVERY FEAR harkened every chilling and suspenseful moment of watching it. Swanson’s pace is brisk, and at any moment you think you have the crime solved, but then another twist happens.”
— Bookreporter.com

“Peter Swanson creates quite a mysterious stew here…. Those readers who are tired of encountering the scenario in which the damsel in distress is rescued by a prince will find much to love here, given how Swanson puts a unique corkscrew on that plot device.”
— Bookreporter.com on Her Every Fear

“A compelling tale of murder and deception that keeps the reader turning pages. Kate is a sympathetic heroine who has seen too much, but rises above it.”
— Authorlink.com on Her Every Fear

“There are many twists and turns in this layered novel… It’s definite stay-up-all-night kind of read and will leave you guessing.”
— News and Sentinel (Parkersburg, WV) on Her Every Fear