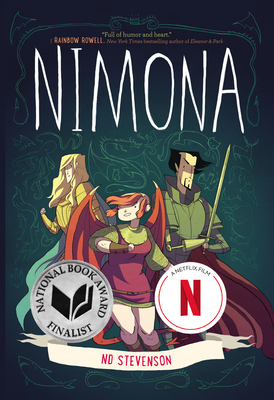 Shape-shifter Nimona convinces Lord Ballister Blackheart that he needs her help to carry out his evil plans and defeat Sir Ambrosius Goldenloin. The latter is with the Instiution of Law Enforcement and Heroics, and both Nimona and Blackheart think it’s not as great as everyone thinks it is. Hilarity and destruction ensue as nothing goes according to their wacky plans in this witty and inventive graphic novel. Nimona is an endearing and smart character, and I dare you not to fall in love with her (in all of her many forms).

Nimona is the New York Times bestselling graphic novel sensation from ND Stevenson, based on his beloved and critically acclaimed web comic. Kirkus says, “If you’re going to read one graphic novel this year, make it this one.”

Nemeses! Dragons! Science! Symbolism! All these and more await in this brilliantly subversive, sharply irreverent epic from ND Stevenson. Featuring an exclusive epilogue not seen in the web comic, along with bonus conceptual sketches and revised pages throughout, this gorgeous full-color graphic novel has been hailed by critics and fans alike as the arrival of a “superstar” talent (NPR.org).

Nimona is an impulsive young shapeshifter with a knack for villainy. Lord Ballister Blackheart is a villain with a vendetta. As sidekick and supervillain, Nimona and Lord Blackheart are about to wreak some serious havoc. Their mission: prove to the kingdom that Sir Ambrosius Goldenloin and his buddies at the Institution of Law Enforcement and Heroics aren't the heroes everyone thinks they are.

But as small acts of mischief escalate into a vicious battle, Lord Blackheart realizes that Nimona's powers are as murky and mysterious as her past. And her unpredictable wild side might be more dangerous than he is willing to admit.

ND Stevenson is the award-winning, bestselling author and illustrator of Nimona and The Fire Never Goes Out, the co-creator of Lumberjanes, and was the showrunner for the award-winning Netflix series She-Ra and the Princesses of Power. He currently lives in Los Angeles. Visit him online at https://twitter.com/Gingerhazing.

ND Stevenson is the award-winning, bestselling author and illustrator of Nimona and The Fire Never Goes Out, the co-creator of Lumberjanes, and was the showrunner for the award-winning Netflix series She-Ra and the Princesses of Power. He currently lives in Los Angeles. Visit him online at https://twitter.com/Gingerhazing.

“[ND] Stevenson has a knack for capturing the humor and heart in a situation in just a few panels.” — Adelaide Advertiser

“If you’re going to read one graphic novel this year, make it this one.” — Kirkus Reviews (starred review)

“Sharp visuals, a nifty amalgam of fantasy and science fiction elements, and relationships drawn with complexity, wit, and depth create a world worth returning to again and again.” — Publishers Weekly (starred review)

“At its core, Nimona is a story of rescue. Each of the main characters rescue allies, friendships, the Kingdom, and ultimately, themselves… A vibrant solo work.” — School Library Journal (starred review)

“[Stevenson’s] voice is clear and precise, [his] drawings confident, [his] use of color growing in depth and assurance as the story progresses.” — New York Times

“Nimona…is beautifully flawed and refreshingly unstereotypical in a book that is both darkly witty and surprisingly touching. And Nimona is a protagonist to both love and fear.” — The Horn Book

“Over the course of the collected Nimona, it’s possible to watch artist [ND] Stevenson blossom from a student to a superstar.” — NPR.org

“Nimona, with all her flaws, breaks away completely from what women are allowed to be in popular fiction.” — Vanity Fair

“Graphic novel fans will finish the book in a gallop and then want to start right back at the first page.” — Bulletin of the Center for Children’s Books (starred review)

“Funny and vibrant, with wonderful energy in Stevenson’s illustrations and a wicked wit in [his] storytelling.” — Slate

“Those of you who haven’t read Nimona yet are lucky, because you can buy the fantasy comic in book form instead of waiting for [ND] to post an update twice a week. Seriously, that wait was always excruciating.” — Kirkus Reviews