Warriors of the Storm: A Novel (Saxon Tales #9) (Paperback) 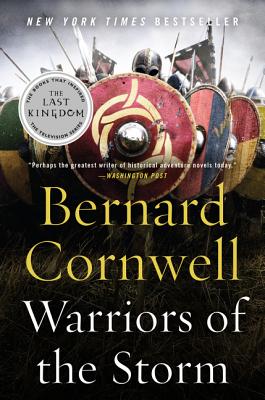 This is book number 9 in the Saxon Tales series.

“Bernard Cornwell does the best battle scenes of any writer I’ve ever read, past or present.” — George R.R. Martin

“Gripping, exciting, and engaging. It is another great read from the masterful author. . . . A Cornwell novel is always full of suspense, and this one is no different. Time after time the suspense is intense. It will have you on the edge of your seat.” — New York Journal of Books

“For those who are looking for something akin to ‘Game of Thrones’ on HBO or in George R.R. Martin’s novels on which it is based, you can’t go wrong with Cornwell’s tales of Saxons in the years before Britain became England.” — Oklahoman

“’Warriors’ may be the best in the ‘Saxon Tales’ series yet…. Cornwell’s informative stories are told with appealing imagination to reveal the complicated, lengthy history of England’s formation.” — San Antonio Express

“Moves from one spectacular battle to the next…. The tangled politics and social mores of the day are intricately interwoven into the plot, placing the frenzied action firmly into historical context.” — Booklist

“Cornwell again offers an exciting and tricky retelling of history from the standpoint of a colorful warrior lord. Historical fiction fans, especially of this period, as well as viewers of BBC America’s The Last Kingdom (based on this series) will want to read the entire set.” — Library Journal

“As usual, Cornwell’s research gives the book veracity, and his rendering of the tale from Uthred’s point of view allows immersion into the complex story of how disparate kingdoms became England. Cornwell’s latest is often bloody, sometimes ribald, but always smartly done.” — Kirkus

“Gripping….One of his great gifts is his fertile tactical imagination. No two battles are the same….Mr. Cornwell’s ‘Saxon Stories’ subvert myths of national origin as few would dare. They are ‘unofficial histories’—and all the more realistic for that.” — Wall Street Journal on Death of Kings