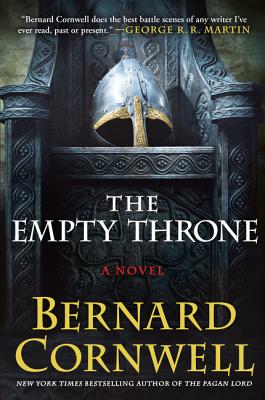 “This novel easily stands alone, with perfectly choreographed battle scenes and political infighting . .. . The lusty, rollicking narrative.... is totally accessible and great good fun. Cornwell’s done it again. New readers: Draw a flagon of ale, and be prepared to find the first seven in the series.”
— Kirkus

“Excellent . .. Mysticism, history, brutality, muck, and mire combine to splendid effect in this compelling fictional version of the birth of a great nation.”
— Booklist

“Verdict: Once again, Cornwell perfectly mixes the history and personalities of tenth-century England with several doses of battles, trickery, and treachery. Is there a fan of historical fiction anywhere who has not yet read a Cornwell? If so, hook them on this series, and they will knight you.”
— Library Journal

“The Empty Throne is Cornwell’s best Uthred tale yet. If there is a throne for writers of this particular type of muscular historical fiction, then Cornwell is firmly wedged in it. And on this evidence, he is not budging.”
— The Times (London)

“Cornwell once again shows his acknowledged mastery of fast-paced storytelling, full of exciting incident and an unflinching approach to bloodshed.”
— Daily Mail