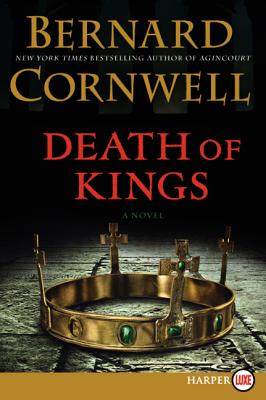 By Bernard Cornwell
$29.99
Email or call for price.

“Gripping. . . . Mr. Cornwell’s ‘Saxon Stories’ subvert myths of national origin as few would dare. They are ‘unofficial histories’—and all the more realistic for that.” — Tom Shippey, Wall Street Journal

“Likely to appeal to anyone who has enjoyed George R. R. Martin’s Game of Thrones series....Cornwell is a master of historical fiction.” — Christian DuChateau, CNN

“Bernard Cornwell does the best battle scenes of any writer I’ve ever read, past or present.” — George R. R. Martin

“Robustly drawn characters and a keen appetite for bloodshed whip the reader along in a froth of excitement.” — James Urquhart, Financial Times

“Cornwell is adept at enveloping his fictional characters in British history. His use of geography, instruments of battle, strategy and ancient vocabulary is faultless….No knowledge of early British history or of his earlier Saxon volumes is necessary for a reader to enjoy his dexterous approach to historical fiction.” — Dennis Lythgoe, BookPage

“[Cornwell] has been described as a master of historical fiction, but that may be an understatement. Cornwell makes his subject material come alive. Better, his major protagonist is totally believable and human.” — Robert Conroy, Library Journal

“[Cornwell] possesses a gift for narrative flow and an eye of the telling detail that are the main reasons for his primacy in bringing turbulent times to vivid life.” — Philadelphia Inquirer

“As expected, the warfare is ferociously bloody, the sacrilege pointedly barbed, and the story expertly paced. Heck, we’d even extol Uhtred’s budding spells of sober reflection about life and love—if we weren’t certain he’d slice an ear off for saying so.” — Entertainment Weekly for Sword Song

“[M]asterful. . . . The surprise is that Cornwell’s love scenes are as deft as his action scenes, though far fewer, of course—all driven by a hard-shelled, sporadically soft-hearted, always charismatic protagonist.” — Kirkus Reviews (starred review)