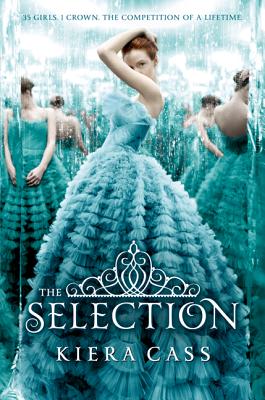 This is book number 1 in the The Selection series.

“In this dystopian setting that overlays a futuristic society with the things we love about old-fashioned fairy tales, Cass weaves an intriguing story with the perfect balance of real-world problems and romance. America is a young, proud girl with a big heart and a bit of a temper from an impoverished family and social class,. She's a talented, self-respecting character who is great fun to follow in this fantastic Bachelor-type setting. I can't wait for the sequel!”
— Larissa Genschaw, Children's Bookshop, Kent, WA

Prepare to be swept into a world of breathless fairy-tale romance, swoonworthy characters, glittering gowns, and fierce intrigue perfect for readers who loved Divergent, Delirium, or The Wrath & the Dawn.

For thirty-five girls, the Selection is the chance of a lifetime. The opportunity to escape a rigid caste system, live in a palace, and compete for the heart of gorgeous Prince Maxon. But for America Singer, being Selected is a nightmare. It means turning her back on her secret love with Aspen, who is a caste below her, and competing for a crown she doesn’t want.

Then America meets Prince Maxon—and realizes that the life she’s always dreamed of may not compare to a future she never imagined.

“Cass’s immensely readable debut novel is a less drastic Hunger Games, with elaborate fashion and trappings. The fast-paced action will have readers gasping for the upcoming sequel.” — Booklist