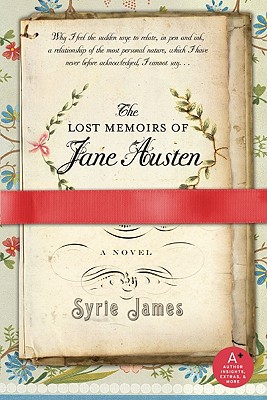 Many rumors abound about a mysterious gentleman said to be the love of Jane's life—finally, the truth may have been found. . . .

What if, hidden in an old attic chest, Jane Austen's memoirs were discovered after hundreds of years? What if those pages revealed the untold story of a life-changing love affair? That's the premise behind this spellbinding novel, which delves into the secrets of Jane Austen's life, giving us untold insights into her mind and heart.

Jane Austen has given up her writing when, on a fateful trip to Lyme, she meets the well-read and charming Mr. Ashford, a man who is her equal in intellect and temperament. Inspired by the people and places around her, and encouraged by his faith in her, Jane begins revising Sense and Sensibility, a book she began years earlier, hoping to be published at last.

Deft and witty, written in a style that echoes Austen's own, this unforgettable novel offers a delightfully possible scenario for the inspiration behind this beloved author's romantic tales. It's a remarkable book, irresistible to anyone who loves Jane Austen—and to anyone who loves a great story.

Syrie James is the USA Today bestselling author of the critically acclaimed Runaway Heiress; Nocturne; Dracula, My Love; The Secret Diaries of Charlotte Brontë; The Missing Manuscript of Jane Austen; Jane Austen's First Love; Forbidden; The Harrison Duet; and the international bestseller The Lost Memoirs of Jane Austen. An admitted Anglophile, Syrie loves all things British and 19th century. Her novels have hit many Best of the Year lists, won the Audie Romance Award, and been designated as Library Journal Editor’s Picks and the Women's National Book Association’s Great Group Read. Syrie lives in Los Angeles and is a member of RWA, JASNA, and the Writer's Guild of America. Visit Syrie at www.syriejames.com.

“This fascinating novel will make readers swear there was such a man as Mr. Ashford and that there is such a memoir... Tantalizing, tender, and true to the Austen mythos, James’s book is highly recommended.”
— Best First Novel of 2008, Library Journal

“James creates a life story for Austen that illuminates how her themes and plots may have developed... the reader blindly pulls for the heroine… hoping against history that Austen might yet enjoy the satisfactions of romance... offers a deeper understanding of what Austen’s life might have been like.”
— Los Angeles Times

“James…[has] a sensitive ear for the Austenian voice and a clear passion for research...a thoughtful, immensely touching romance that does justice to its subject and will delight anyone who feels...that Austen couldn’t have written with such insight without having had a great romance of her own.”
— Jane Austen's Regency World Magazine

“Austen and Ashford seem a perfect match in matters of head and heart ... though she hews closely to the historic record, [James] creates...will-they-or-won’t-they suspense that culminates with a proposal and an “intensely” kissed Austen. A pleasant addition to the ever-expanding Austen-revisited genre.”
— Publishers Weekly

“There are not enough accolades i could use to recommend this book ... I read it thinking all the while it was a newly discovered memoir of the famous writer. That is how good the writing is... It is a love affair equal to anything Jane Austen wrote.”
— News Review

“Suspenseful... and filled with surprises... one of the best additions to the current spate of books featuring Jane Austen.”
— Santa Barbara Independent

“James has taken on an enormous task-channel Austen and bring her back to life-and she has done just that ... Talk about a love story. Whether or not it happened, James has created the possibility in an intelligent, historical romance novel. I do believe that Jane would approve.”
— Writer's Flow

“Readers may find themselves forgetting that the book is fiction… James bases her book on facts from Austen’s life and … clearly depicts Austen’s witty imagination and keen intelligence… Readers may want to pour themselves a cup of tea before settling in with this novel… It’s a delightful read.”
— Montgomery Advertiser

“A delicious novel... comic scenes of hilarity together with love scenes of great emotion, witty dialogue, and well-drawn characters. Jane Austen comes alive from the first page to the last. You truly believe that you are reading her long-lost memoirs, not a historical fiction novel.”
— diavasame.gr, Athens, Greece

“Rarely have I read a book that I enjoyed as much ... I honestly believe even Jane herself would have loved this book... It’s written so well, and stays so true to form for the historical period, that it feels uncannily like a real memoir ... utterly delightful!”
— Romance Reader At Heart.Com

“Captures all that is best and true about Jane Austen … You will find yourself caught and enchanted ... For die-hard Austenites, this is the book you’ve been waiting for; for those of you wishing for knowledge of how to be a writer like Austen, you can find that, too.”
— Romance Vagabonds.com

“A fantastic addition to all things Jane … one of those books that must go into the pile that I will read again and again … James does a beautiful job weaving together elements of fact, fiction, and imagination, which made this reader believe in the truth of her fiction.”
— Savvy Verse & Wit.com

“James’s book imagines a Mr. Ashford for Jane, a man with whom she shares a good deal of passion in the two years preceding the publication of Sense and Sensibility ... And if she didn’t she should have, as it makes for a compelling read.”
— News Observer

“The writing style was so effortlessly Austen that I almost felt as if I truly was reading a memoir penned by her own hand. And while these lost memoirs were just a fabrication, Ms. James did a terrific job of melding the historical details from Ms. Austen’s life.
— The Writer's Road Less Traveled

“A story that not only leaves you believing ‘it could have happened,’ but wishing ‘oh… I hope she had this’ ... I was wholly engaged from beginning to end ... When I closed the cover (the very tactilely pleasing cover) … I felt as though I’d made a friend.”
— Dear Author.Com