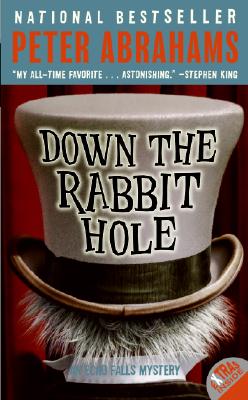 This is book number 1 in the Echo Falls Mystery series.

Down the Rabbit Hole is the first book in the Echo Falls mystery series by bestselling crime novelist Peter Abrahams. Perfect for middle school readers looking for a good mystery.

Welcome to Echo Falls, home of a thousand secrets. In Down the Rabbit Hole, eighth grader Ingrid Levin-Hill is in the wrong place at the wrong time. Or at least her shoes are. And getting them back will mean getting tangled up in a murder investigation as complicated as the mysteries solved by her idol, Sherlock Holmes.

With soccer practice, schoolwork, and the lead role in her town's production of Alice in Wonderland, Ingrid is swamped. But as things in Echo Falls keep getting curiouser and curiouser, Ingrid realizes she must solve the murder on her own—before it's too late.

The next book in this Edgar Award-nominated series in Behind the Curtain, followed by Into the Dark.

Peter Abrahams is the New York Times bestselling author of twenty-five books, including the Edgar Award-winning Reality Check, Bullet Point, and the Echo Falls series for middle graders. Writing as Spencer Quinn, he is also the author of the Chet and Bernie series—Dog on It, Thereby Hangs a Tail, and To Fetch a Thief. He and his wife live in Massachusetts with their dog, Audrey.